Boxing is back with a big name for the year 2023. Last night, WBA World Lightweight champion Gervonta Davis, soundly beat Hector Luis Garcia. Tank brought the fight all night, did wonderful work in the pocket and in the end, Garcia couldn’t come out for round nine, giving Davis the victory. Now all eyes are set on the April 15th date as Davis and Ryan Garcia have a mega-fight booked. So, to bring in the new year, let’s knock back the first edition of Aftermath for 2023!

Hector Luis Garcia: A Tune Up

Hector Luis Garcia came into this fight at 16-0 with 10 knockouts. His role was to come in and let Davis work. He did just that and showed some interesting things to us that could come into play come April 15th when Gervonta Davis takes on Ryan Garcia.

Davis is a pocket fighter and likes to work there. He generates great power in short distances and has a very good Jack Dempsey impression when it comes to in-fighting. He’s incredibly dangerous there and it’s probably where Tank does his best work. Hector Luis Garcia couldn’t keep out of the pocket with Davis and couldn’t do enough to gain the respect from his American foe to keep Davis off of him.

Garcia, more or less, fought where Davis dictated where the fight would go and due to that, he was beat for the entire fight. While he did manage to catch Davis in some spots with some decent shots, nothing Garcia did was of any consequence and he took a whoopin’ and a payday because of it.

Garcia loses his undefeated record but, if we’re being honest, he is the WBA Super Featherweight champion. He’s taking on Gervonta Davis, the WBA World Lightweight champion, who is going up to 140 to fight Ryan Garcia. Hector Luis Garcia gave up some weight to take this fight. He’s still a champion and there are some good fights for him down at 130 where he belongs. Shakur Stevenson moved up and now there’s a power vacuum. Champs like Shavkatdzhon Rakhimov, Anthony Cacace, and Archie Sharp will want to unify with Garcia and other contenders like Oscar Valdez and Masanori Rikiishi are looking for their shot at a world title. Garcia can make himself yet another payday at super featherweight.

Gervonta Davis: Brush off the Rust

Gervonta Davis battered Hector Luis Garcia for all eight of the two’s fighting rounds. He was not in any real trouble but did show some signs of weakness and holes that could be exploited by Ryan Garcia on the two’s April 15th showdown. But all in all, Davis shined in Washington DC and put on quite the show after a great shutout from Jaron Ennis on the same night.

As mentioned earlier, Gervonta Davis fights very well in the pocket. He favors being shoulder to shoulder and landing huge uppercuts and hooks over the top to produce some electrifying knockouts. He favors the rear left uppercut a la the Leo Santa Cruz finish that notched him Knockout of the Year from several pundits in 2020. Davis has fought some tough fights in the past few years and won them all. Yuriorkis Gamboa was over the hill and was battered in 2019, then the Santa Cruz knockout, and after that, Davis took complete control. Mario Barrios, Isaac Cruz, Rolly Romero, and now Garcia. The only one who could deal with the power of Davis was Cruz who is about as tough as it gets.

In the pocket, Davis really went to work with Garcia, however, and did enough to make Garcia realize that this fight wasn’t for him and that the damage wasn’t worth it. He broke down the taller opponent with hooks, body work, and fun head movement that allowed Davis to work on the inside and wear his opponent down gradually.

The first thing we should talk about with Gervonta Davis is the Philly Shell. His time with Floyd Mayweather has evolved Tank into a fighter who isn’t scared to get in the pocket and is very, very hard to hit. With the Philly Shell, Davis keeps his left hand up to protect his jaw on the left side. This stops any power shots from an orthodox opponent but against Garcia, it protects the jab and lead hook. Then, Daivs tucks his chin behind his lead shoulder, hiding from Garcia’s power shots. To avoid getting hit, Gervonta Davis will utilize the shoulder roll to avoid any big shots from his opponent. 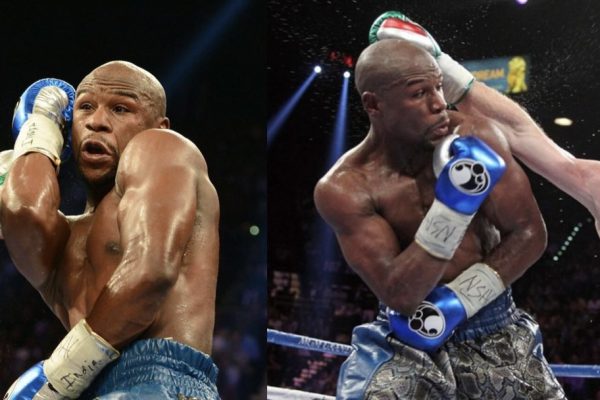 What’s interesting for Davis is that the Philly Shell actually protects his body from vicious shots as well. The liver should be a point of target of any orthodox fighter fighting a southpaw like Davis. Davis counters this by keeping his elbow low and protecting his body that way instead of keeping a high guard and having to drop his hand to protect his body. This was, of course, mastered by Floyd Mayweather, who flustered opponents with this approach. Davis, who was under the tutelage of Mayweather for the majority of his career, uses the Philly Shell to be able to stay in the pocket even longer.

Despite being the heavier fighter, Davis was the much smaller man against Hector Luis Garcia. This is often a common theme throughout his career and he’s learned to deal with it with footwork and head movement. In figure 2 above, we see how Davis uses this to get into the pocket and how he’s built good habits around it. (1) Garcia will throw out a lazy jab and Davis will first dip to his left and, second, weave to his right. (2) As he steps in, Davis is looking at his opponent anticipating return fire and wants to get ahead of it. You’ll see a lot of less experienced fighters dip and weave but looking straight down. This is no good. If you’re not looking at your opponent, you cannot see and make adjustments on the fly to avoid the blow. Should you get caught off guard, it could be a short nap for you. Finally in range, (3) Tank comes up and looks to exchange and jab. Unfortunately, he wasn’t quite in range like he expected and didn’t fire off anything of consequence.

Work the body, open the head

For Gervonta Davis, working the body to open up the power shots up top is a huge priority and what he’s built his game around. Garcia was victim to this all night and struggled to stop any of the body shots from Davis. This means he will trend to cheat on defending these low blows, something Davis knows about quite well. It’s how he makes his living.

In round 8, Davis started to take control and it led to the win because of this direct action. (1) We see Garcia wanting to keep Davis off of him with the jab. Davis will (1) use this to weave to his left and (2) load up the lead uppercut. (3) The uppercut lands heavy to the midsection of Garcia and Davis, who put all of his power into the shot, will need to reset. He will step back and reset while keeping his lead foot in the same area. (4) On the reset, we see Davis watching Garcia keep those hands low once again, still thinking about the body shot from Davis moments ago. Davis peeks this out and will take advantage of it. (5) He will fire a huge left that lands just perfect against Garcia and snaps his head to the side.

Once Davis picks up on these fight tendencies, he pokes at them relentlessly. While he trained under Floyd Mayweather for over a decade, Davis is an offense-first minded fighter. He looks for the finish as is apparent by the 26 knockouts in 28 fights. When he finds a thing that works, he will routinely go back to the well and push the pace to keep the fight where he wants it.

Near the end of the fight, Davis would go back to the proverbial well again. He sees that the body work has paid off and (1) Hector Luis Garcia is cheating again and keeping his hand low. Unlike Davis and his use of the Philly Shell, Garcia is facing Davis head on and his chin not tucked. This provides a lane for the cross to come through and (2) Davis will land one. Once again, Garcia raises his guard in response to the left cross instinctively. This opens up the lead hook to the body which is naturally loaded up by the cross. (3) Davis will go to the body again, knowing that Garcia doesn’t like it and will lower his hands again. He intends to land it with some power to really get them hands dropped. It works like a charm and Davis opens up the cross again. (4) It lands and sends Garcia reeling back, trying to survive the final minute of the fight.

Ultimately, Hector Luis Garcia would decide the damage isn’t worth it and call the fight off. His corner probably made the right call as the only thing that could happen going into round nine was more damage to their fighter, a reigning World Champion at Super Featherweight. Davis would become the victor.

Now all eyes are on King Ry himself. A fast handed orthodox fighter with more size and reach than Davis. Davis, however, is the better power puncher and has the edge mechanically. But styles make fights and the upcoming fight with Ryan Garcia on April 15th is the type of fight that is incredibly fun to break down. Let’s look forward to that!

In addition to covering MMA for My MMA News, Blaine Henry, the author, also analyzes fights from all combat sports across the globe.

By Kyle Carroll 3 weeks ago