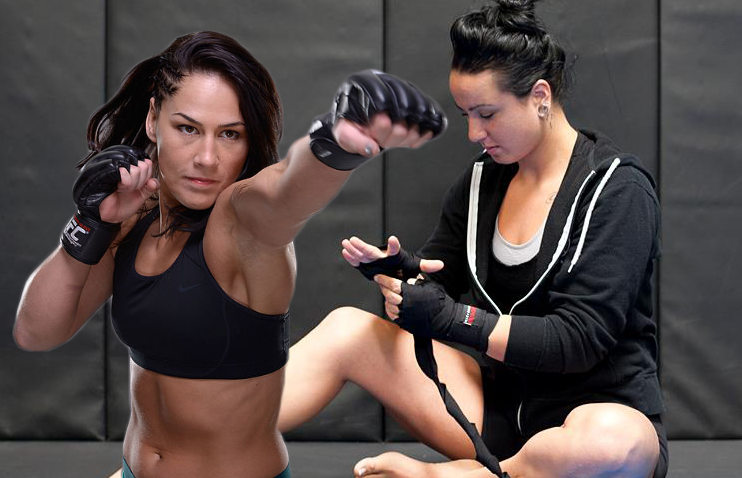 UFC President Dana White often talks about ‘timing’ being the key component to booking a fight.  Is the time right?

Ashlee Evans-Smith and Jessica Eye are two ladies that have had their names thrown at one another as possible opponents while fighting at bantamweight but never actually met inside the octagon.

While both found some level of success fighting at 135-pounds, each has stated they felt that 125-pounds was the more appropriate weight class for them to be competing.  With the UFC only officially launching the women’s flyweight division in 2017 it was bantamweight or bust.  If they wanted to fight in the UFC, they had to compete at 135 pounds.

Now with the 125-pound option and each having recent victories at the lower weight class it seems the timing that White often talks about might be right.

Evans-Smith recorded a unanimous decision victory over now former UFC fighter Bec Rawlings at UFC 223 in Brooklyn, New York.  “Rebel Girl” was present for the shenanigans caused by ‘The Notorious One’ Conor McGregor but did not let the famed fighter’s actions throw her off mindset.  It was her first win at 125-pounds and her third overall victory while employed by the UFC, moving her professional record to 6-3.

This past weekend “Evil” Eye grabbed her second UFC flyweight victory with a unanimous decision win over Jessica-Rose Clark in Singapore.  Eye was emotional in her post fight victory interview with Dan Hardy on Saturday. “Y’all judged me because I wasn’t a bantamweight… but now I’m the bigger girl!”

Why is the right time to book Ashlee Evans-Smith vs Jessica Eye?

The better question is “Why isn’t it?”

With both ladies previously ranked at bantamweight and having never come to a fight agreement, they are now once again closely numbered at 125-pounds.

If Evans-Smith wants to continue to rise in the UFC rankings, she needs to beat women who are currently ranked ahead of her.  “Rebel Girl” currently positioned at number 11 and Eye two spots ahead at number 9, the pairing seems right.

Numbers 7 and 8, Barb Honchak and Roxanne Modaferri are slated to meet at the Ultimate Fighter Season 27 Finale in July.  Number six ranked Liz Carmouche will take on unranked Jennifer Maia  at UFC Fight Night 133 on July 14, and number five ranked Katlyn Chookagian will square off against Alexis Davis at UFC on FOX 30 on July 28.

The time for Ashlee Evans-Smith vs Jessica Eye is now.