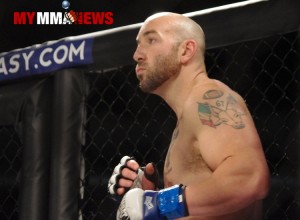 DeRiso has shown great character both, inside and out of the cage. After losing his mother in a tragic car accident five years ago, he has turned his grief into motivation. Whether it’s inside the cage or outside of the cage, the champion showed his championship spirit as he has persevered. DeRiso didn’t allow sorrow to swallow him like it does to so many people. He is currently a business owner of a successful gym as well, “Revolution Fitness“, located in East Northport, New York. They offer a variety of different classes and instructors that fit your health needs. Visit their website for more information by Clicking Here.

While the MMA Platinum Gloves MW champion was live on the air we talked about Long Island MMA, his journey through his mixed martial arts career, and what his future holds for him next.

Be sure to tune into MMA Sports Talk with Kyle Carroll on Monday nights at 6:30 p.m. EST. on Blog Talk Radio.

Listen to his interview by following the link below-

This Monday Night we will be joined by Vincent DeRiso of Bellmore Kickboxing & The MMA Platinum Gloves middleweight champion. He finishes 2015 with a 5-1 record and Looks to knock off the remainding contendars in 2016, before turning pro.