On Thursday night in Sonora, Mexico, RJJ Promotions launched their 2022 premier event with a bang! Live on UFC Fight Pass, Roy Jones Jr. Boxing Promotions has cultivated a reputation for producing top quality boxing shows from all over North America. This show in particular was set in the city of Ciudad Obregon, birthplace of the famous Julio César Chávez. This makes it the perfect stage to host a memorable evening of professional boxing.

The fight night’s main event featured a battle between two highly skilled Mexican fighters, Luis Torres (14-0, 9 KO) and Rodolfo Flores (14-5, 6 KO). In addition to being the evening’s main event under the lights in the Palenque de la Expo, this bout also served as one of two lightweight tournament matches on the card. 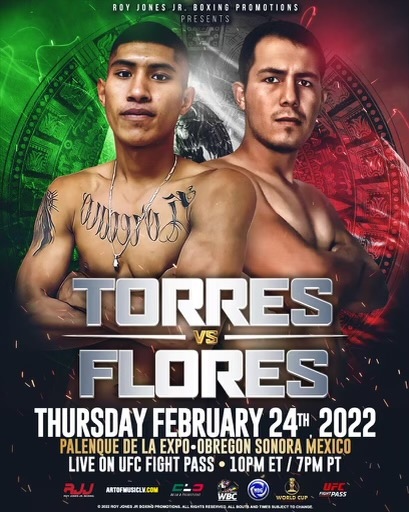 Torres, the local city hero from Ciudad Obregon, went into this bout coming off an impressive unanimous decision victory following a ten-round war with the experienced Guillermo Avila Godinez. Although the undefeated lightweight competitor has made a name for himself within Mexico, he has high hopes of eventually fighting with one of the major promotions in the United States.

Intending to spoil Torres’ stateside plans, was Rodolfo “Rudy” Flores of Sinaloa. Beginning his promising professional boxing career in 2011, Flores has more recently had his share of struggles in the ring, including a third-round TKO loss to Jesus Saracho back in September.

An Exciting End to The Evening

As their hometown star made his way to the ring, the crowd erupted, cheering his name. In the first round, Torres was setting up his punches beautifully. It was evident that he was on the hunt for his tenth knockout. The crowd favorite started the second round strong and connected with a powerful right hook, dropping Flores to the canvas.

Flores showed tremendous fortitude by rising to his feet and continuing to trade shots in the pocket. But, his opponent continued to find openings to land hard punches. As he continued to give no respect to his adversary’s striking prowess, Torres landed another set of punches in the round three, dropping Flores for a second time.

Following shortly after, the first half of the fourth round proved to be the end of the night for Flores as he found himself pressed in the corner with no chance to evade, resulting in the fight being stopped.

And that’s all she wrote in the main event!#RJJBoxing pic.twitter.com/GBKrbYu9uH

In light of this victory, Luis Torres advances to the World Cup Boxing Series tournament final, presented by RJJ Promotions, on June 2nd. He will face Irving Castillo (11-2) who added a win to his record earlier on the card by way of a majority decision over Isai Hernandez.

Quinton Randall vs. Ivan Alvarez ended in a Technical Draw (Doctor Stoppage due to cut above Alvarez’s eye)