Former UFC women’s bantamweight champion Ronda Rousey has filed an application with the U.S. Patent and Trademark Office for an image and slogan that really needs further explanation to be understood.

The image for which Rousey is seeking to get trademarked is below.  The drawing is a creepy looking version of Ronda with the words “Rowdy Ronda Rousey is in the house.” 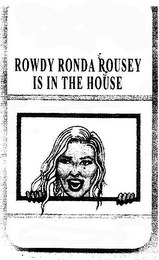 The correspondent listed on the patent is famed martial arts trainer ‘Judo’ Gene LeBell.  According to the application the text and images are to be used for ‘Plastic name badges’ and the process began on March 11, 2015.

Rousey has also trademarked “DNB” or “Do Nothing Bitch” which was commonly used during her title defense against Bethe Correia, as well as “F*ck! Them All”

There really is not much more information to go at this time about the intended purpose of the image or if Rousey will continue to move forward with the process that started more than a year ago.