The No. 11 ranked Russian light-heavyweight talent Magomed Ankalaev just picked up his fifth-straight victory today at UFC 254, as he again finished Ion Cutelaba in round one. The two were scheduled in an immediate rematch after the first ended in controversy. 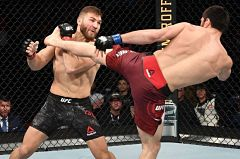 Cutelaba was playing possum in their first fight and it cost him, the referee didn’t realize he wasn’t actually hurt. He came in this time walking Ankalaev down bobbing and weaving, throwing heavy punches.

Ankalaev was picking him apart the entire time however. He caught Cutelaba with a straight left when Cutelaba was attempting a spinning attack and momentarily dropped him.

Not long after, Ankalaev lands a beautiful right hook-left straight combo to secure the KO finish at 4:19 of round one. Their first only lasted 38 seconds. 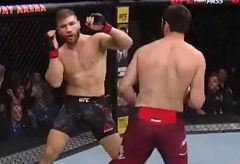 Ankalaev came to the UFC with a perfect 10-0 record, having won, and defended the WFCA Light-Heavyweight Championship prior to coming over.

He lost his promotional debut via submission (triangle choke) to Paul Craig in a fight he was dominating. 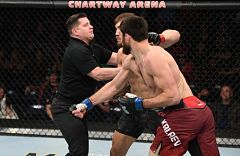 Ankalaev mauled Craig that entire fight, there may have even been a couple 10-8 scorecards, but Craig wrapped up the triangle and got the tap at 4:59 of round three.

That was in March 2018, and Ankalaev’s since gone 5-0 with four knockouts, improving his professional record to 15-1.

Those victories came over Marcin Prachnio, Klidson Abreu, Dalcha Lungiambula, and now Cutelaba twice. He’s dominating everyone he’s been fighting, it’s time for a step up in competition for this Russian assassin. 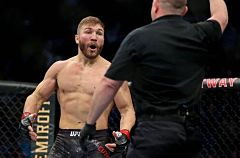 Ankalaev also had a very successful amateur career, where he won many championships, the most notable being the World MMA Union title. He’s also an International Master of Sport in Combat Sambo, there’s a reason Ankalaev’s so technically sound. 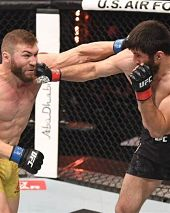 Now that Ankalaev finished off the job he started back in February, what’s next for him?

We’ve got to assume he probably won’t go up in the rankings too much, if at all considering Cutelaba wasn’t ranked coming in. A fun fight would be if he could rematch Paul Craig. He just rematched Cutelaba, why not rematch the only man to defeat him? 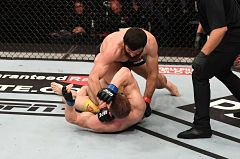 The only problem with that one is that Craig is actually set for a rematch of his own against former UFC Light-Heavyweight Champion Mauricio ‘Shogun’ Rua. Regardless of the winner, either one of them would make a good fight with Magomed Ankalaev.

There’s the No. 10 ranked Misha Cirkunov, who hasn’t fought since his first-round submission (Peruvian Necktie) victory over Jimmy Crute back in September of last year. The No. 8 ranked Nikita Krylov would also make for a very compelling match up. 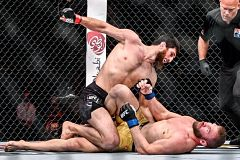 Krylov is 26-7 as a professional with 25 finishes, he’s also 28-years-old, he’s at a similar spot in the rankings, and he, like Ankalaev, is a finisher. Lastly, and this may be the best match up of all the ones mentioned, is a fight with the No. 6 ranked Volkan Oezdemir.

Oezdemir did just get knocked out by the now No. 5 ranked Jiri Prochazka, but he’s still as dangerous as they come, and he’s finished 13 of his 17 wins.

That would be quite an epic striking battle, they’re both so technically sound in that area and both have real nightmarish knockout abilities. Ankalaev has all the tools to become a world champion in this sport.

He just keeps quietly climbing the ladder, don’t be surprised to see him get a co-main or main event bout against a top five opponent very soon. He could very easily be 16-0, as mentioned above, his only defeat came in a fight he couldn’t have been more dominant in.

Why does UFC still remain one of the most important world-fighting championships in 2022?

By Staff Report 7 days ago