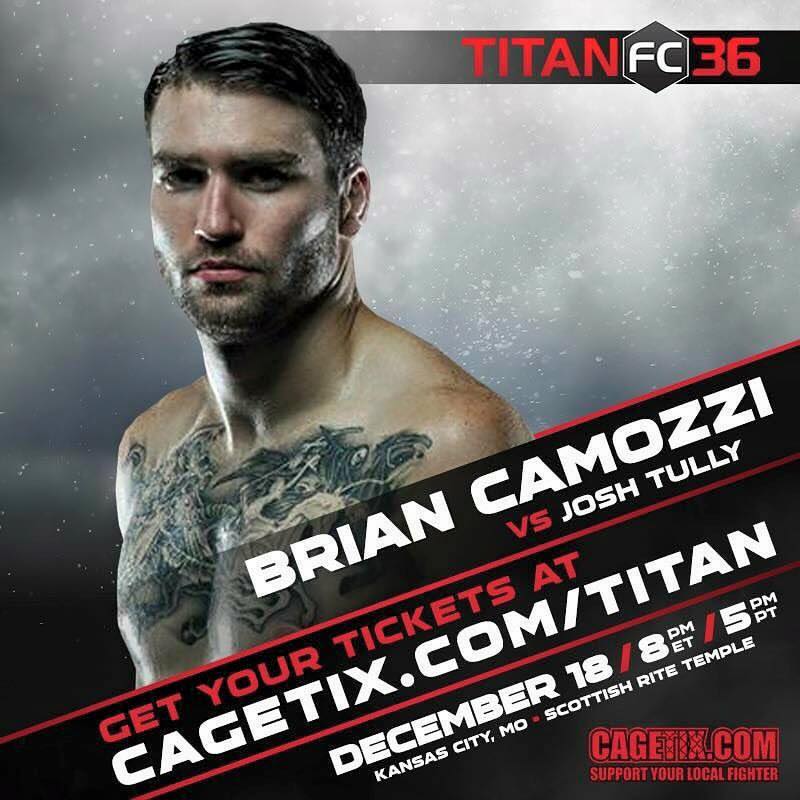 Brian Camozzi is scheduled to face Josh Tully at Titan FC 36 on December 18th in Kansas City and broadcast live exclusively on UFC Fight Pass to fight fans around the world.

Regarding the signing Camozzi said, “I am excited to be fighting for Titan. It is a great platform to showcase my skills and a necessary step on the way to the top.” He continued, “Josh Tully is a tough opponent and I am coming into his hometown but I have been training hard and I’m ready to show everyone what I can do.”

Lex McMahon, COO of Titan Fighting Championship, had the following to say about the signing of Camozzi to the promotion. “Camozzi is legit. Phenomenal striker always looking for the finish. He’s a hungry guy that will be a great young face for the Titan FC brand. We are excited to watch his development, I’m sure he’ll be a big star in the future.”

Brian Camozzi made his amateur MMA debut in April of 2012 winning The Beatdown Lightweight Championship with a submission victory over Chris Lobato in less than 2 minutes time. Though it was his amateur MMA debut, Camozzi had competed in four Muay Thai bouts previously. Camozzi amassed 2 more MMA wins in 2012 as an amateur finishing each of those fights in under 2 minutes finishing the year and his amateur career with a perfect 3-0 record.

Camozzi’s professional debut came in January of 2013 for Sparta Combat League and he has fought for other promotions including GLORY, NAAFS, and PFC. Brian Camozzi vs. Josh Cavan in February of 2014 at PFC 5 was Examiner.com’s pick for Fight of the Year in 2014. Camozzi most recently defeated Matt Cox via armbar at 2:06 ofthe opening round to become the Sparta Combat League Welterweight Champion. Camozzi will vacate the championship as he moves on to the next chapter of his career.

Purchased by Jeff Aronson in 2014, Titan FC is dedicated to establishing itself as a marquee MMA promotion for both up-and-coming & veteran fighters. Aronson immediately developed a #FansFightersFirst creed towards providing fans with great, action-packed fights and fighters an opportunity to showcase their skills on a competitive platform. In June of 2015, Titan FC partnered with the UFC (Ultimate Fighting Championship) to showcase past, present and future Titan FC events on the UFC’s digital streaming network, UFC Fight Pass. In doing so, Titan FC is now available to mixed martial arts fans across the globe.

By James Colwell 12 hours ago