UFC, PFL, and Bellator veteran Dan Spohn is set to compete in his home state for the first time since 2016, as he’ll headline Ohio Combat League 20 on July 2 against Tyler Vogel.

Spohn has been known as a viral knockout artist in his career, including a memorable nine-second flying knee over Dane Bonnigson at Bellator 51 and an incredible right hook knockout over Tyler King in his TUF 19 preliminary fight that left UFC president Dana White and coaches B.J. Penn and Frankie Edgar speechless.

A product of Ronin Training Center in Columbus, Spohn will compete for the first time since a draw against Emiliano Sordi at PFL 2021 #5 and he looks for his first win since a decision victory over Artur Alibulatov at PFL 2018 #5. Spohn has 12 wins via stoppage, including seven knockouts and five submissions. His overall record is 18-8-1. 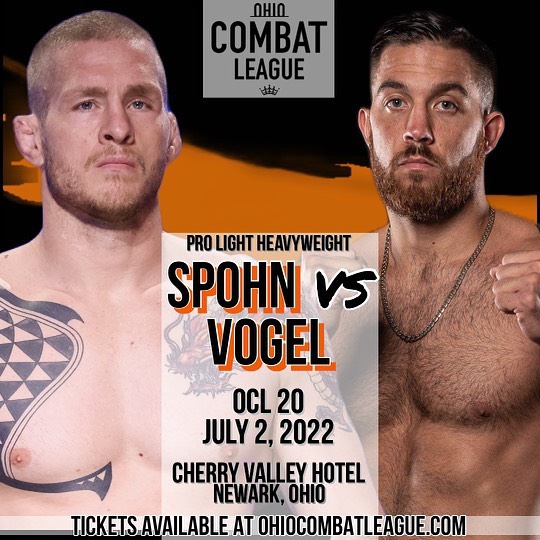 Vogel comes in from North Dakota, where he’ll have his first MMA bout since 2019. A veteran of LFA and the World Series of Fighting, Vogel has recently competed in both traditional and bare-knuckle boxing. He holds an 8-5 MMA record and a 3-6 pro boxing record.

Also set for OCL 20 is a featherweight bout between veterans Antonio Castillo Jr. and Keith Speed. Castillo has won his last three fights – two in MMA and one in boxing. Most recently, he stopped Andrew Huffman via TKO in the first round at OCL 17 in January in one of the best performances of his career. He holds a 13-15 overall MMA record.

An Ohio native, Speed now lives in Florida and trains with American Top Team in Coconut Creek. After starting his pro career with a 1-3 record, he’s 4-1 in his last five, including back-to-back wins. He topped Shawn Tarlton via decision at OCL 15 last September and submitted Reginald Mack II via triangle in the first round at Combat Night Pro in November.

Ohio Combat League 20 takes place on July 2 at the Cherry Valley Event Center in Newark, Ohio. The current lineup is below.