This news was originally reported by @TjinMMA on Twitter.

Buist posted about this next step in his mixed martial arts career on his personal social media to confirm the crossover between companies. 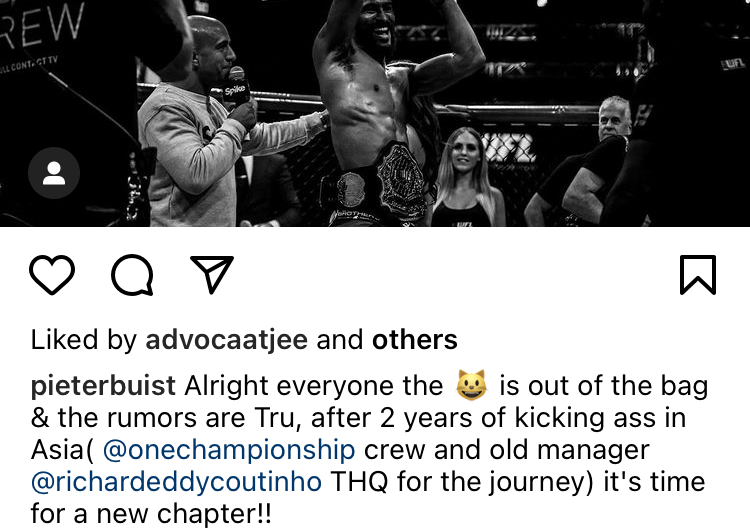 Pieter Buist ended off his journey in the ONE Circle on a two-fight losing skid.

He dropped a pair of unanimous decision losses to former ONE lightweight title challenger Timofey Nastyukhin and rising star Ruslan Emilbek in November 2020 and November 2021, respectively.

In Buist’s full IG caption, he stated, “Alright everyone the (cat) is out of the bag & the rumors are Tru, after 2 years of kicking ass in Asia( @onechampionship crew and old manager @richardeddycoutinho THQ for the journey) it’s time for a new chapter!! @bellatormma , @bellator.europe is my new home/family and I’m hungry and on a mission, I have a new fire that’s bigger than ever & I will claim that lightweight mma world title within 2 years. The competition is tuff but I don’t give a f#ck. I believe in myself and will do everything within my power to achieve my goals.”

“Shout-out and THQ to my team: @combat_brothers Team @mousasi @neems01, @moments_mgmt And my sponsor’s.  And of course a shout-out to: @bellatormma , @bellator.europe @therealscottcoker thq for welcoming me with open arms !!! Now let’s do this !!! Stay tuned fight. News coming very soon.”

The veteran of The Netherlands regional MMA scene debuted with ONE Championship in May 2019. He finished Kota Shimoishi via second-round grounded knees at ONE: Warriors of Light. A fight that kicked off an eventual three-fight winning streak.

Buist’s biggest name-value win during his run with the company was his split decision victory over former ONE lightweight world champion Eduard Folayang at ONE: Fire & Fury in January 2020.

The Archangel has an overall mixed martial arts record of 17-6 and went 3-2 specifically under the ONE banner.

What are your feelings on Pieter Buist moving from the ONE Circle to the Bellator cage?

By Brady Briggs 6 mins ago

By Brady Briggs 11 mins ago

By Alex Behunin 44 mins ago