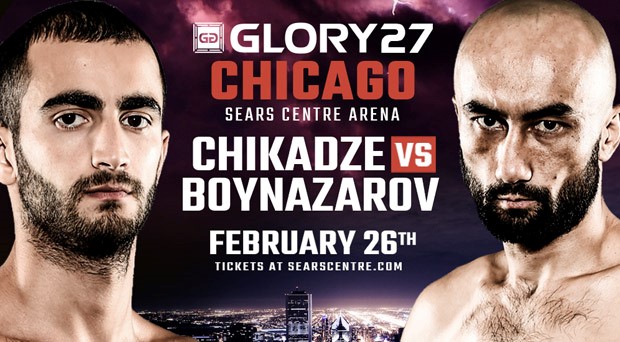 New York, NY – GLORY, the world’s premier kickboxing league, today announced the co-headline bout and one-night, four-man North American Middleweight Contender Tournament participants to round out the fight card for the organization’s return to the Chicago area on Friday, Feb. 26.

Headlining GLORY 27 Chicago is the highly anticipated grudge match between reigning GLORY Middleweight World Champion Artem “The Lion” Levin (51-4-2, 34 KO) and red-hot No. 1 contender Simon “Bad Bwoy” Marcus (42-2-2, 24 KO), the rubber match of a championship trilogy that began in 2013. In order to find the next challenger for GLORY’s middleweight title, earning the right to face the winner of Levin vs. Marcus later this year, GLORY is hosting a one-night, four-man North American Middleweight Contender Tournament on the same card.

The five fight card for GLORY 27 Chicago can be found below:

Additional match-ups for GLORY SuperFight Series Chicago, taking place the same night as GLORY 27 Chicago and aired on CBS Sports Network, will be announced at a later date.

Tickets for GLORY 27 Chicago (including access to the GLORY SuperFight Series Chicago) are priced at $200, $100, $60 and $35. Tickets are available for purchase at searscentre.com and the Sears Centre Arena box office.