After defeating Alistair Overeem via knockout in 2013, Antonio ‘Bigfoot’ Silva saw himself take a tumble down a horrendous losing streak rarely seen inside the UFC octagon. 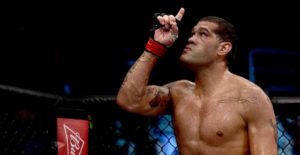 Silva would lose his next fight to Cain Velasquez, followed by a draw with Mark Hunt, and then another two losses, one to Frank Mir, and one to Andrei Arlovski.

After a glimmer of hope and a TKO victory over Soa Palelei, Silva lost another three fights in a row, most recently to Roy Nelson in September.

After only having one win in eight fights, the UFC decided to part ways with the 6’4″ monster.

It seems Silva has a new venture however after being offered a fight in Russia.

MMAjunkie today confirmed with Silva’s manager, Alex Davis, that “Bigfoot” will compete in the main event of an upcoming Titov Boxing Promotion event on Nov. 18 in Yekaterinburg, Russia.

The fight will be contested under mixed martial arts rules, not boxing, and Silva will go up against undefeated Ivan Shtyrkov (4-0).

“We are very excited for the new opportunity,” Davis said. “‘Bigfoot’ was already in the gym today, preparing for the fight against Shtyrkov.

“Russia has become a big hub of the MMA world, and we are thrilled to be a part of it.”

“I’m very excited about the upcoming fight against Shtyrkov,” Silva said. “I have made many fans in Japan, Brazil and the U.S., and I will make amazing fans in Russia. Thank you to all my fans, RCC Boxing Promotions from Russia and to Alex Davis and Narcis Mujkic, who made this fight happen.”