Coleman is on a two-fight win streak and seeks his third victory to bring his record to 3-0. He plans to keep taking MMA one fight at a time. DeCoursey hopes to improve her record to 7-1 with a win over Lindsey VanZandt.

The atomweight champion (DeCoursey) has her goals set to fight her professional debut on an Invicta FC fight card.

DeCoursey and Coleman fight Friday night, December 16, 2016, at World’s Collide. A cross promotion event of KTFO and ACC. These two promotions announced Saturday night that they have merged to form Triton Fights. The fights take place at a beautiful venue that brings patrons back to an older generation with their classic atmosphere. 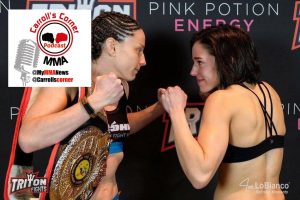 Tickets can still be bought at www.ktfo.com and www.accmma.com. My MMA News will be on the scene covering the event, Follow My MMA News on social media at @MyMMANews.

Interested in joining me on the podcast? Email me your name, and information at kyle@mymmanews.com.

By Doug Geller 51 mins ago