Chris Lencioni joins Lenny from MyMMANews this week to talk about his upcoming bout vs. Cody Law.

Cris (9-3), will make his second stint at Bellator and his return to the promotion will see him take on highly touted prospect Cody Law (6-1).

Cris’ adversary Cody Law will look to bounce back after suffering his first professional defeat in his last outing vs. James Gonzalez. Law is an NCAA Division II champion and two-time DII All-American out of University of Pittsburgh-Johnstown.

Cris is an accomplished brow-belt in jiu-jitsu in his own right, training out of his own gym Sunshine Athletics based in Canby, Oregon. As previously mentioned, Cris will return to Bellator after going 4-2 in his first tenure. “Sunshine” had a three-fight spell away from the promotion beating former UFC fighter Drako Rodriguez.

Thanks to Bellator and Chris for setting this up.

A grappler vs. grappler match-up on paper, but where does Cris see the fight playing out?

He is like a COVID fighter; they gave him all these fights during COVID when guys didn’t even train. Most of his record doesn’t mean sh*t to me. I pay attention to the fact that he comes from ATT (American Top-Team) and he is a high-level wrestler who thinks he is a boxer. He hasn’t been in MMA too long, so I am much more experienced than this guy, so I am looking forward to it. I don’t see him putting on a hurting to me and if he does then f**k you.

He is going to sniff my crotch for sure…all up in there. He is going to take one hit and go hands will go out just like every wrestler when they take a big hit.

I want the easiest fights over and over again. Cody Law is an easy fight and he’s supposedly ranked number 9, and then I want 8 or 7 whoever is easiest…then eventually number 1 or champion whoever is easiest.” 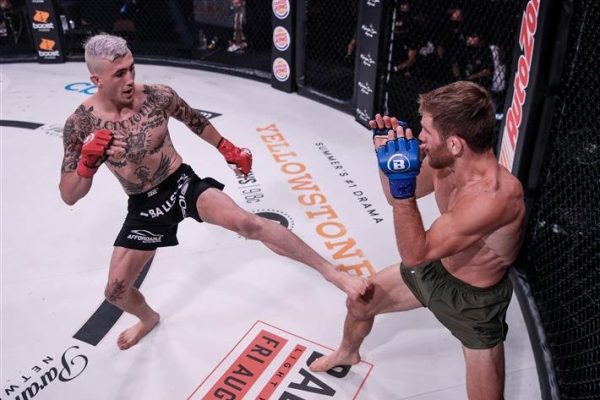 Cris will make his return to a big promotion, and he feels it is where he should have been all along:

“The last two years I have been incredibly frustrated, because I knew I was top level in MMA. I like to look at it like baseball, you got single A, double A, triple A and then you got the big leagues. There are so many MMA fighters out there that think they are big league material, but they are double A or triple A. I know I am big league material…the only bad guy I have fought is a guy with a record of 11-10 that is still 21 MMA fights that is a lot. He is 50/50 pretty much, that is a dangerous man, he will either beat your arse or you will be his arse…you don’t know what flavor you will get.”