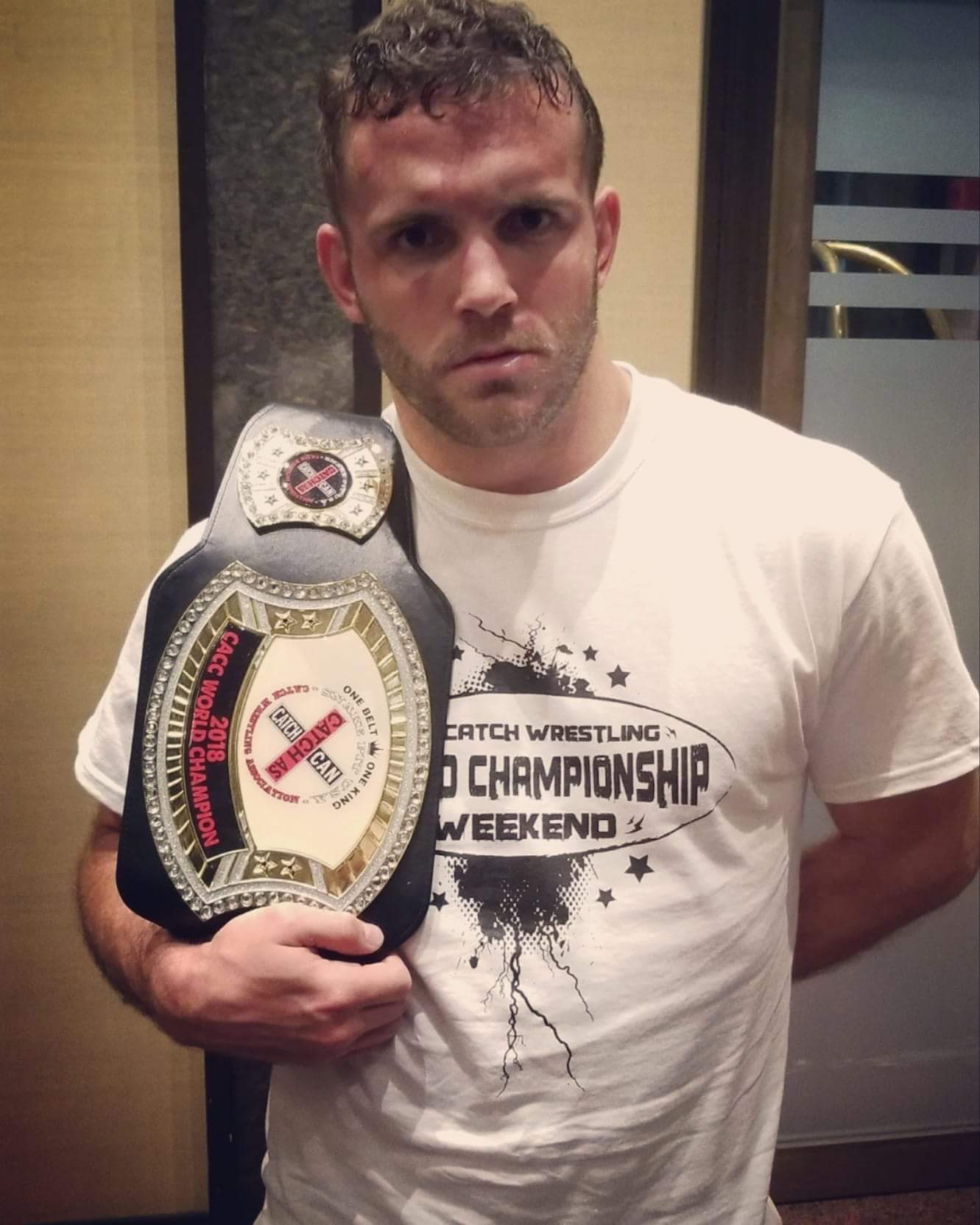 A competitive spirit allows an individual to face the toughest of challenges in their mission to achieve their goals. The slaying of three world-class grappling giants on July 14th marked a pivotal moment in the career of Curran Jacobs, as he fulfilled his dream becoming the 2018 Catch Wrestling World Champion. The capturing of the prestigious title hasn’t stopped his competitive drive, as Jacobs has launched a new crusade seeking  challenges in other grappling combat sports genres.

The Catch Wrestling World Champion has sent the grappling world of Brazilian Jiu-jitsu into a frenzy with his open challenge directed at ADCC World Champion Gordon Ryan and 5 time EBI Champion Garry Tonon. Relatively unknown to the BJJ audience the call out has been met with some negative criticism questioning Jacob’s capabilities of dethroning the self-proclaimed “King of Submission Grappling” and dispatching of the “Lion Killer.”

Conceited and egotistical or confident and audacious? Only we here at MYMMANEWS.com know and so will you, as we get an inside look into the mind of Curran Jacobs.

Curran Jacobs: When I was 16 years old, my brother Scott died in a car accident on Christmas day. He was the only reason why I wanted to be in sports; I knew it made him proud. I almost quit wrestling after he died, but my family encouraged me to continue, especially my Mom. I thrive on the hunger to outwork everyone, and I’ve always had the mindset that if someone wants to beat me, they have to kill me. Brandon Ruiz almost broke my arm, and he almost choked my unconscious twice, but I refused to quit. Bones heal, and if I were to have passed out, I would have woken up. I will never quit, and I will never stop moving forward. That is what I thrive on, and that is why I’ve been so successful in combat sports.

You referred to your finals match victory against Ruiz, which led you to become the 2018 Catch Wrestling World Champion. Talk to us about the emotion going through you that day of accomplishing such a feat and how life has changed since that memorable day?

Curran Jacobs: I was overwhelmed with all sorts of emotions. It was the one year anniversary since the death of my mother, and that affected me. I watched her suffer for three years before cancer claimed her life. She is the most influential woman I will ever know, and she is my inspiration. I wish her and my brother Scott could have seen me defeat those giants in person. They would have been so proud. My life has changed because now I am a catch wrestling world champion and one of the best overall grapplers in the world. I am very thankful. 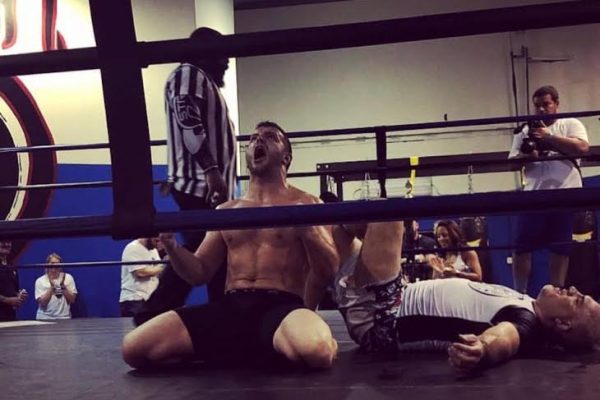 How important was that tournament in bringing unity within the Catch Wrestling community?

Curran Jacobs:  It is extremely important to me. I am now in control of my destiny, and I vow to take catch wrestling to the next level. I will do this by keeping the peace between ALL of the catch wrestling organizations around the world; as the champion, I must lead by example. Eventually, catch wrestling will be available for men and women all over the country. 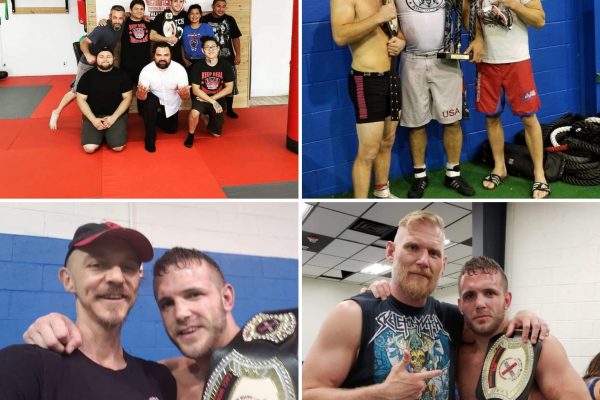 With you as one of the leaders, how important is it for you to represent and bring the sport of Catch Wrestling to the forefront?

Curran Jacobs: It has been one of the most important goals I’ve had since I had dinner with Randy Couture, Sam Spira and Mike Chapman in Malibu, CA back in 2014. When I learned of this sport, I knew right away that it had the potential to be the biggest sport in the world. I love Brazilian jiu-jitsu, but wrestlers outnumber BJJ practitioners 10 to 1. And this is a wrestlers sport, but it will be open to grapplers of all disciplines.

Curran Jacobs: I issued nothing; I merely answered his challenge. He thinks he is the best wrestler in the BJJ universe, so he made his challenge PUBLIC. Gordon said that he could beat anyone in a first to ten takedown matches, where submissions are legal for defense, as well as an offense on the feet – that is called CATCH WRESTLING. I was the 1st to accept his challenge, and now he is running from me. He wants nothing to do with me, and I have saved all of our conversations to prove it. He is scared.

Was this challenge initially used as an opportunity to get your name more recognized, or  just you being the competitive person you always have been throughout your career?

Curran Jacobs: I am a competitor, a fierce one. And when someone challenges me, I never hesitate. I saw that Gordon Ryan challenged the world and I stood up to claim the opportunity.

Things seem to have taken a turn for the worst, as derogatory comments have been made at you and vice versa. What issue have you taken the most offense to in the midst of the online trash talk, and do you feel you brought it on yourself with your initial attack?

Curran Jacobs: I don’t appreciate the fact that Gordon Ryan and Garry Tonon are attacking my fans. I asked them to stop, and they kept on harassing my friends and family online. I merely accepted Gordon’s challenge, and they felt like they had to attack me. I privately messaged Tonon to set up a match with him, and instead of giving his manager’s info, he threatened to send “dick pics.” They are despicable human beings, and they want nothing to do with me.

Wars of words online many times can come across as very hurtful to other viewers, although the intention is aimed to attack the competitor, in this case; Ryan & Tonnon. You have many Brazilian Jiu-jitsu practitioners that support you. To clear up any confusion, do you despise Brazilian Jiu-jitsu?

Curran Jacobs: I DO NOT despise Brazilian jiu-jitsu. I think it is an amazing art when used correctly. No one should ever pull guard. No one should ever sit to their butt and scoot. I am the best overall grappler in the world right now, and it is because I’ve spent ten years studying BJJ. I’ve studied what works in BJJ and what doesn’t. It is an art that was created for an ONE-ON-ONE combat situation. In an event where you have multiple attackers, you have to stay on your feet and FIGHT. Tonon and Ryan would get killed in that scenario because they are used to sitting. Their type of BJJ is a joke, and it is a reflection of their terrible attitudes and poor sportsmanship. I have beaten them, and I haven’t even stepped on the mat with them. THEY KNOW what would happen. So does their coaches. BJJ CAME FROM CATCH WRESTLING – and I am a Master in it. I want to educate. I want to teach. But I want to teach the good BJJ guys who understand respect and sportsmanship. Clowns like Tonon and Ryan needs to disappear, and I’ll see to it that they do. I Promise.

What do you feel gives you the advantage against these elite Submission Grappling competitors?

Curran Jacobs: Here is why they know they cannot beat me. I would destroy both of those guys in the same night, one after the other. Because they aren’t wrestlers and they aren’t battle tested. The EBI is a flawed system because it plays right into Gordon’s game. If they were to accept a combat jiu-jitsu match with me, I would be all over it. Because in real life, no one sits to their butt in a fight, they would get kicked in the face. Gordon and Garry are not real martial artists, and I want to prove it.

If this match takes place what do you hope to gain with a victory over Ryan and/or Tonon?

Curran Jacobs: I want to end their careers.

Aside from the personal issues, what do you feel this victory will do you for personally?

Curran Jacobs: They will prove what I’ve been saying all along, that I am the best grappler in the world.

Finally, what do you feel this epic match will do for combat spot of grappling?

Curran Jacobs:  After I beat Gordon Ryan and Garry Tonon it will change combat sports forever. Because people will realize that BJJ isn’t the greatest ground art in the world. Not even close. And if you don’t believe me, tell the “The King” and “The Lion Killer” I am waiting. Never underestimate the fury of a patient man.

By Michael Henken 10 hours ago