After months of negotiations and rumors about him returning back to the UFC, former welterweight champion Georges St-Pierre told Ariel Helwani today during ‘The MMA Hour,’ “My lawyer terminated the contract with the UFC.” 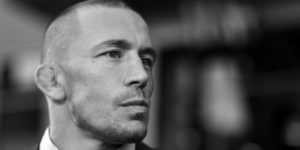 GSP states his lawyer, James Quinn, terminated his UFC contract after the organization did not meet a deadline to offer him. There were rumors about him coming back to headline UFC 206 in Toronto next month but that fell through and all rumors were nixed by UFC President Dana White.

“There’s a certain mentality you have to have to be a fighter, and Georges St-Pierre hasn’t had that mentality for a long time,” White said. “And sometimes that’s not a bad thing. Listen, the guy went out on top. How many athletes really go out on top? Go out the way you want to go out? The guy made a lot of money and when you take – this isn’t a sport you take a three-year layoff from.”

GSP said today he was under a 2011 contract with the UFC and was working on a new deal, but talks fell apart when the UFC was sold to WME-IMG in July. GSP said WME-IMG pulled the offer on the table from former CEO Lorenzo Fertitta and put negotiations on ice.

“It was like a shock, because we felt like we were making progress, we were almost there,” St-Pierre said. “When they told us that, I got angry.”

“I remember at some time, the UFC told us that they would take a huge financial risk to have me back, and they would need to spend a lot of money to re-introduce me to the new audience,” St-Pierre said.

The former champion was not too thrilled about the recent comments from White.

“I don’t dislike Dana White; he was a big part of what I do, and a big part of what I earned is because of Dana White,” St-Pierre said. “Dana White can organize a fight between the (Incredible) Hulk and Mother Theresa and make people believe it will be an even fight and people need to see that fight. He’s so good at promoting, and when he says something, everybody believes it.

“The reason I wanted to go back and fight is because i feel right now that I’m at my best,” St-Pierre said. “I’m truly confident I can beat the guys that are champions right now. I’m that confident. At least I’m a free man. Now, I know I’m free. I have other options. I’m not caught up legally with a contract. I’m a free man.”

Where GSP will go, if at anywhere at all is still a mystery but you can expect that wherever he goes it will do big numbers.

By James Lynch 11 mins ago

By Adam Crist 15 mins ago

By 'Beautiful' Bob Meloni 27 mins ago