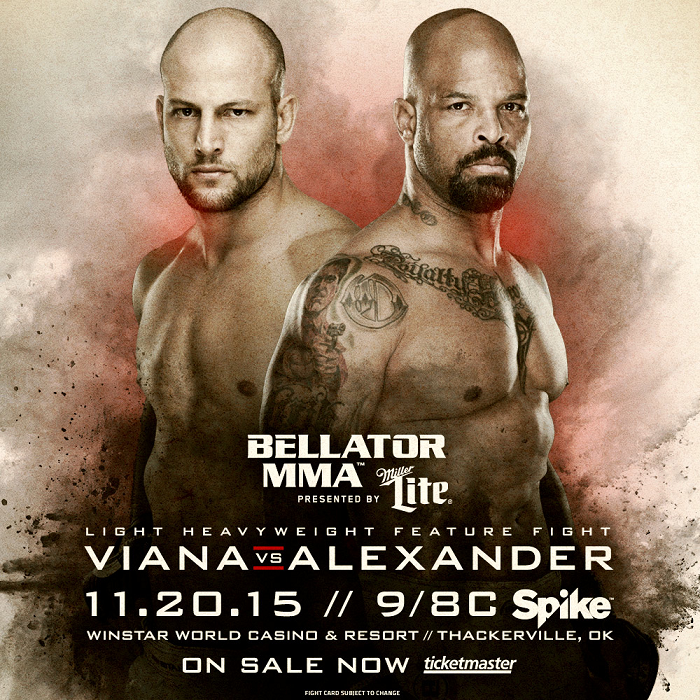 The televised card of “Bellator 146: ‘Kato vs. Manhoef,” airs live on Spike at 9 p.m. ET/8 p.m. CT, while preliminary bouts will stream on Spike.com at 6 p.m. CT. Tickets for “Bellator 146: Kato vs. Manhoef” are on sale now at the WinStar World Casino and Resort Box Office, as well as Ticketmaster. Ticket prices range from: $75, $55, $45 and doors for the event open at 5:00 p.m. CT local time, with the first contest taking place one hour later.

At 43-years-old, Houston Alexander has been competing professionally since 2001, lacing up the gloves from promotions the likes of Ultimate Fighting Championship, Shark Fights, Resurrection Fighting Alliance, KSW and Bellator MMA. “The Assassin” is known for his one-punch knockout power, a skill the Grudge Training Center standout has showcased in 11 of his 16 wins as a professional. Now, a loser of his last two bouts, Alexander looks to end 2015 on a high note at the expense of his Nov. 20 opponent.

Coming off a defeat in his Bellator MMA debut, the 29-year-old Viana looks to bounce back against an opponent who has more than two times his experience. Hailing from Brazil, Viana has made a living off ending fights early, stopping the man standing opposite of him inside the cage five times before reaching the judges’ scorecards.

By Andrew Sumian 12 hours ago