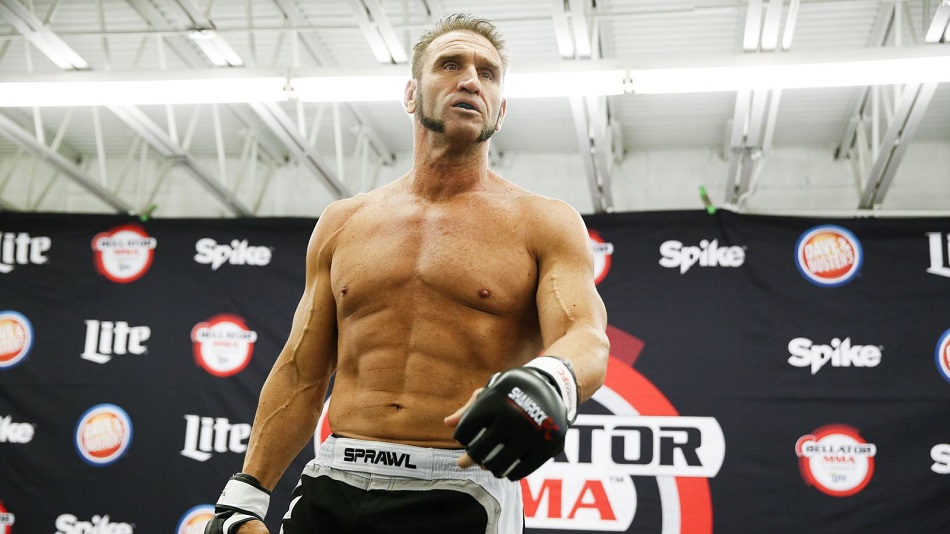 UFC Hall of Famer and Bellator MMA Veteran, Ken Shamrock, has been teasing on social media about some pending “big news” to be released in the near future.

When MyMMANews.com reached out to Shamrock’s management the answer received was “it will be revealed Friday during the Bellator 145 broadcast.”

Former WWE champion Kurt Angle participated in last night’s Bellator Fan Fest in St. Louis and the organization teased a meeting of the two men before a commercial break leading fans to believe the announcement would involved a fight between Shamrock and Angle.

Earlier in the night during the James Thompson and Bobby Lashley bout, Angle commentated and suggested that a fight might be in the near future.

Shamrock last fought in June losing to Kimbo Slice via first round TKO.

The news however did not involve a rematch with fellow UFC Hall of Famer, Dan Severn as we had speculated, or Angle.  Instead, a third bout with Royce Gracie.

Below is a letter from Ken Shamrock:

To a fighter, each and every bout matters. But sometimes a fight rises above– surpassing the importance of all others. The upcoming fight between Royce Gracie and myself is that fight.

On Friday evening, February 19, 2016, on Spike TV, I will fight Royce Gracie In Houston, Texas.

This will be my third fight with Gracie. The first fight was UFC 1 in 1993, which was the start of the rise of no holds barred era– the new combat sport of interest in the U.S. and abroad. Furthermore, this was the start of the dominance of Royce Gracie. Our second fight was UFC 5, in 1995, which was an eight man tournament and the first ever UFC Superfight where Gracie and I squared off. This fight proved to be the exit of Royce Gracie and my rise to dominance.

Few can understand the magnitude of importance that this fight personally is to me. Rounding out my career as a professional fighter has to be done with the right fighter. For two years, we have been searching for the right fight with the right fighter. This important bout had to be with a meaningful UFC Hall of Famer like a Dan Severn or Royce Gracie.  We have been in discussions with Bellator for over a year to make this Gracie fight a reality, and it has finally happened.

The recent record breaking fight that I did with Kimbo Slice (Bellator 138) showed me that I was still both physically and mentally prepared to battle. The hunger to fight was still there and I got to scratch that itch. Physically, I had not been in that good of shape since my thirties. A few months later, I am still in shape, feel great, and I am healthy. I am not getting any younger, and matter of fact, I will be 52yrs old by the time of the bout. If I am going to fight again, it has to be now and with the right fighter that makes sense for me, my legacy, and the fans who I love to entertain. Who better to fight than the esteemed Royce Gracie? This is a perfect opportunity for me in more ways than one. This will be a fight that you will not want to miss. The fact is, it will never be witnessed again.

After the Gracie fight, I plan to slow down and refocus on the various business endeavors that we’re involved with now. I enjoy business and making deals—like the deal we recently closed to fight Gracie. For me, I am blessed to have a large fan base and name recognition. The Shamrock brand is strong, and we are making it stronger.  Eventually fighters will all transition out of competing in a cage to competing somewhere else to sustain their living or lifestyle. For me, I wanted to explore business opportunities and the best way to do that was to build a strategic partnership with the right person.

Instead of building a team for fighting, I built a team for business. My business partner, Des W Woodruff, has been the right fit for my needs going into the future. He’s created many opportunities that we’re now involved in such as being substantial shareholders of New Generation Consumer Group (NGCG) for the brand Mucho Macho that has incredible snacks and drinks—including my Shamrock Slam.

Furthermore, we are working with a very exciting company that has a new mouth guard that has advanced technology (two patents) that will help identify health risks. This will be big. There are other big deals that are in the works or have recently closed, but you’ll have to hear about them later. The logic of me teaming with an entrepreneur has been huge for me. Every fighter should have an entrepreneur on their team.

Hopefully, you are excited as I am about the upcoming Shamrock vs Gracie fight. It’s retro. It’s cool. It will be one for fans spanning back to the very beginning to today.