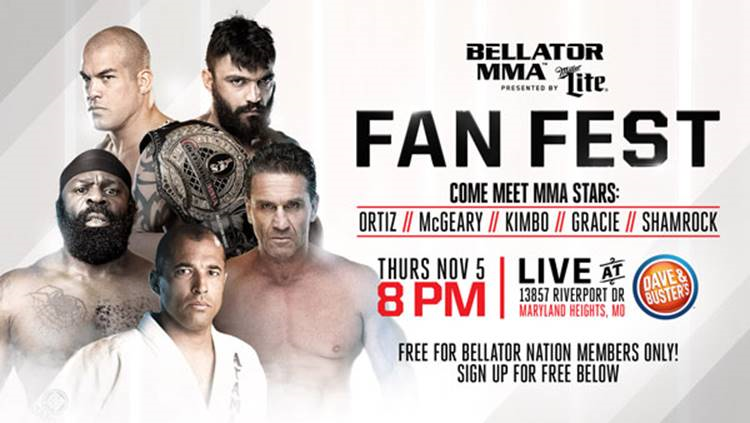 Fans of all ages are invited to Dave and Buster’s in Maryland Heights, MO to meet and receive autographs from some of the greatest and most popular MMA fighters of all time. Fans will also have the opportunity to win tickets and great prizes, as well as snap a photograph with the Bellator ring girls.

WHO:  The name Gracie is synonymous with MMA, and that is largely in part to Royce Gracie, the man who is considered to have invented the sport as we know it today.  The winner of the first several UFC events, Gracie would dismantle multiple opponents in a single night, many of whom were much larger than him.  For many years there was no answer for the Gracie Jiu Jitsu technique that he brought into a fight.  Today, it’s hard to find an MMA fighter who hasn’t trained in the art of jiu-jitsu.

There is only one Kimbo Slice. The unmistakable bearded brawler achieved fame through a series of street fights that garnered extreme levels of attention on YouTube. After parlaying his fame into an MMA career, Kimbo exploded onto the scene and became one of the sports most popular stars of all-time.  Kimbo has been the focal point of the first and third-most watched MMA fights in the sport’s history. This past June in St. Louis, his fight against Ken Shamrock shattered Bellator MMA’s viewership records.

Often referred to as “The Godfather” of MMA, Ken Shamrock is a pioneer of the sport, and introduced an incredible brand of MMA that helped shape the sport into what it is today. With incredible suplexes and leg locks, “The World’s Most Dangerous Man” always made for must-see TV.  His heated rivalries with guys like Royce Gracie and Tito Ortiz generated incredible buzz, and helped popularize the sport.  His fight with Tito Ortiz was at one time the second-most watched MMA fight of all time.

The first British World Champion in the history of MMA will always be Liam McGeary. At 6’6 the towering fighter has achieved notoriety around the world with his impressive skillset which has seen him end fights with impressive knockout power as well as jiu-jitsu prowess.  Currently undefeated at 11-0, the future is bright for the Bellator MMA Champion. Most recently, McGeary defeated fellow Fan Fest participant Tito Ortiz in the main event of the groundbreaking “Bellator MMA: Dynamite 1.”

Tickets for “Bellator 145: ‘Vengeance,” which start at just $30, are on sale now at Ticketmaster.com and at the Ford Box Office at Scottrade Center. Doors for the event open at 5:00 p.m. CT local time, and the first contest takes place one hour after.