A pair of “The Ultimate Fighter” veterans, Pannie Kianzad and Raquel Pennington will meet at UFC Fight Night on Sept. 18.

The women’s bantamweight bout was first reported by Front Kick. The location and venue for the event is yet-to-be announced.

Kianzad, a member of TUF 28, found a home in the bantamweight division after rattling off four-straight victories at 135 pounds. She most recently defeated Alexis Davis by unanimous decision at UFC 263 in June. The Swedish fighter also earned decisions over Sijara Eubanks, Beth Correia and Jessica Rose-Clark during the run.

In her UFC 263 post-fight interview, Kianzad expressed interest in fighting Pennington, stating the two were originally slated to fight at the event.

Pannie Kianzad was cut from the UFC after suffering a second-round submission loss to Macy Chiasson on the TUF 28 Finale in November 2018. She then dropped from featherweight to bantamweight, earning one victory outside of the promotion. Kianzad returned to the octagon as a bantamweight, dropping a unanimous decision to Julia Avila at UFC 239 in July 2019.

She is unbeaten since then.

Pennington is the winner of two of her last five UFC bouts. She most recently beat Marion Reneau bu unanimous decision at UFC on ESPN 11 in June 2020. “Rocky” served a six-month suspension from USADA for the use of prohormone 7-keto-DHEA and peptide AOD-9064, which Pennington said were prescribed by her doctor to help treat a medical condition.

She became eligible to return to competition in May. A member of season 18 of “The Ultimate Fighter,” the former title challenger is a 13-time UFC veteran. She hold notable victories over Rozanne Modafferi, former champions Miesha Tate and Jessica Andrade. 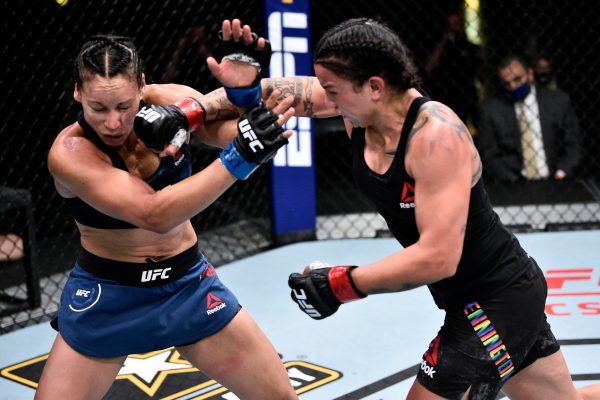