Click the image below to get a FREE 7-day trial of ESPN+ and also to order the pay-per-view. 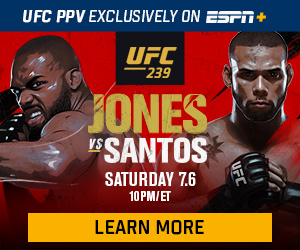 In the main event, UFC flyweight champion Henry Cejudo looks to add another belt to his list as he takes on  Marlon Moraes. Cejudo, also the 125-pound champion is moving up in weight after defeating former bantamweight TJ Dillashaw at fliyweight earlier this year, knocking him out in seconds.  Dillshaw had moved down to 125-pounds to challenge for Cejudo’s title but was unsuccessful and later found to have taken an illegal substance. As a result he forfeited his bantamweight belt.

Tonight Cejudo’s challenger would be Brazilian mixed martial artist, Marlon Moraes, a former WSOF title holder.  Cejudo retain the belt, knocking him out in the third round.

In the night’s co-main event, UFC women’s flyweight champion Valentina Shevchenko defended her strap against Jessica Eye.  It was Shevchenko’s best performance yet as she knocked Eye out in the second round, after picking her apart in the first.  Eye was on the receiving end of a head kick that floored her and caused great concern after she did not come around for quite a while.  Very scary situation.  Shevchenko retains and is open to fighting any of the top 10.

One of the most intriguing fights on the card pairedTony Ferguson and Donald ‘Cowboy’ Cerrone at lightweight.  What a weird and strange fight.  It went as you would expect, both warriors looking for the knockout win.  Just as a round was expiring, Ferguson threw a shot, and it landed.  Cowboy looked dumbfounded, and referee Big Dan Miragliotta didn’t like it.  Ferguson slapped Dan’s hand out of the way.  Dan said he gave a ‘strong warning.’ As the final round started, Cerrone blew his nose on an already swollen eye, and it got worse.  Doctors entered the octagon, instant replay was called, and the fight was waived off.  Ferguson wins.

Eddie Wineland, the first WEC bantamweight champion, proved that he’s not done yet and has plenty of gas in the tank as he knocked out organizational newcomer Grigory Popov in devastating fashion.

What an impressive victory for rising star Calvin Kattar who put away the season veteran in Ricardo Lamas. Nasty KO!

Bantamweights Aljamain Sterling and Pedro Munhoz put on a 15-minute back and forth war that was sure to please mixed martial arts fans.

Headlining the preliminary bouts, strawweights Tatiana Suarez and Nina Ansaroff battled to the bell in a fight that could have determined the next title contender. Suarez wins a unanimous decision.

Heavyweights Blagoy Ivanov and Tai Tuivasa stood toe-to-toe for three full rounds, each having near fight ending moments, but not able to completely pull the trigger.  This one goes the distance with the former WSOF/PFL fighter in Ivanov getting the nod.

By Blaine Henry 31 mins ago

By Mary Hartman 4 hours ago

By Matthew Huang 7 hours ago