Chinese welterweight talent Li Jingliang just picked up the biggest victory of his career last weekend at UFC Fight Island VII, as he shockingly knocked out the returning Santiago Ponzinibbio in the very first round. 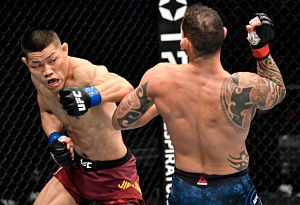 This was an incredibly impressive performance, and not many were picking ‘The Leech’ to win this fight. Ponzinibbio was on a seven-fight win streak with four knockouts coming in, while Jingliang was coming off a unanimous decision defeat to Neil Magny.

The thing is, Ponzinibbio hadn’t fought in 26 months leading into this bout, and he literally looked like someone who hadn’t fought in over two years. Dominick Cruz remains the only man to defy ring rust from a two-plus year period.

That doesn’t exactly take away from the Argentinian’s abilities though, he’s still one of the best welterweights in the world. He has a similar style to Jingliang, and this is why most were picking him to win.

It didn’t matter though, as Ponzinibbio ran straight into a left hook of Jingliang, and that was all she wrote. Jingliang was the victory via KO at 4:25 of round one.

After going 2-2 to start out his UFC career, Jingliang went on to win his next four-straight with three knockouts. Then came a unanimous decision defeat to Jake Matthews, before winning his next three with two knockouts. He was then out-classed by Magny, before returning with this thunderous KO victory.

That brings us to the question, what’s next for Li Jingliang? Well, this Performance of the Night just moved him up to No. 12 in the UFC welterweight rankings, so he should be facing a ranked opponent next, right? 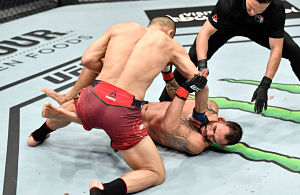 No. 11 ranked Geoff Neal would be a great contest to see each of them in. Neal is coming off a five-round unanimous decision defeat to Stephen Thompson, after initially going 5-0 inside the octagon with four finishes.

No. 9 ranked Vicente Luque would also be a barn burner of a match up. Luque is an incredibly dangerous striker, like the previous name mentioned, and like Jingliang himself. He’s also very good on the mat, this would be an epic welterweight showcase.

Lastly, is a match up with the loser of Leon Edwards and Khamzat Chimaev, why not? This would also be a great fight. Edwards is ranked at No. 3, while Chimaev is ranked at No. 15, with the winner skyrocketing to the top of the division.

Of course, Edwards is already there, and as we know, Jingliang is ranked at No. 12, that’s why we say the loser of this bout. It certainly makes more sense than him facing the winner. Whatever ends up being next for this Chinese tank, it’s a sure thing we’ll all be tuning in!

By Chris De Santiago 7 hours ago