This Friday, December 7 in Fresno, California, Combate Americas will hold their second Copa Combate. A one night, eight-man tournament, where the winner will receive $100,000, and a very large trophy. Mika Frankl caught up with tournament favorite, Andres “The Bullet” Quintana at Lutrell/Yee MMA & Fitness, to talk about his win in the qualifiers, what he knows about the tournament format, and how he prepares for three fights in one night.

This interview was conducted before the release of the tournament bracket for the featherweight Copa Combate.

Talking about his submission win in the qualifiers: “People really don’t want to strike with me, I guess. Strikers clam there going to stand and strike with me and they don’t, they shoot. Like I say, they shoot for their lives. It’s just how it always goes. He was kind of in on a double. I took him down. We were in a grappling exchange why not finish him there.”

Quintana’s thoughts on the rest of the field for Copa Combate: “They’re alright. Nothing to impressive. There’s a couple of guys that are tough. But we’re going to see how the bracket is. I’m not too sure what the bracket looks like as of now. I think myself and Alejandra (Flores) will probably be on opposite sides, I believe that’s what Combate has been saying.”

Preparing for the Copa Combat format: “We been sparring one round, five minutes really hard, taking a little break, a few rounds off, then jumping into a 3 by 3 (3 rounds of 3 minutes) and the same thing taking small breaks in between. Obviously, I should have more time to recover in between the fights.”

How do you train for the possibility of so many different types fights?

Play video above for full interview 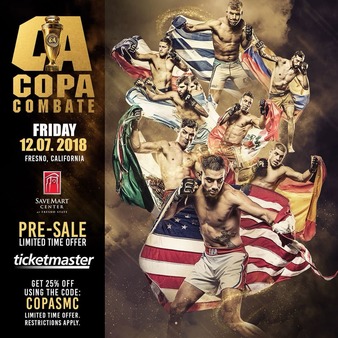 By Matthew Putterman 4 days ago