Art of War Cagefight will hold AOW 3 tonight from the Lanco Fieldhouse in East Petersburg, PA.  MyMMANews is on scene with complete Art of War Cage Fighing 3 results.

In the main event, hometown favorite Zak Kelly looked to record his fourth professional win as he took on Ryan DiBartolomeo.

Ben Moser defended his AOW bantamweight title against challenger, Eddie Doud. A lightweight bout between Bart Pierre and Duane Shields would declare the next competitor in line for a shot at the organization’s lightweight title.

Jace Kendle kicked off the card and his mixed martial arts career with a second round submission win over Damir Bradley.  It was Kendle’s first amateur fight.

Rashaun Day battled Luis Angueira for three full rounds, with several takedowns going in favor of Day who would go on to earn a unanimous decision in East Petersburg.

Christian Carr of Gracie 717 was dominant in his MMA debut against Joseph Rodiguez.  The newcomer landed a takedown in the first round and then maintained back control throughout the opening frame.  In the second round he was able to get two more takedowns and solidify himself as the leader on the judges’ scorecards.  In the third round, Rodriguez attempted a kimura but Carr escaped and finished the fight in the mount position.  All three judges scored the fight in favor of Carr.

In the only women’s fight on the night, Lateesha Mohl reversed a takedown from Criszaida Adames and was able to control most of the first round from the top.  Adames took back the second round with a takedown of her own.  The third round again proved to be in favor of Adames as she landed another takedown and controlled the fight on the ground, earning her a unanimous decision. 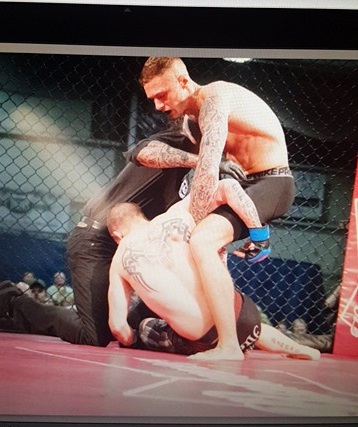 There was some serious confusion in tonight’s main event between Zak Kelly and Ryan DiBartolomeo.

There was a question as to whether referee Jimmy Chappell stopped the fight or not, but Kelly let go of his opponent and celebrated in victory.

That’s when Greg Sirb, executive director of the Pennsylvania State Athletic Commission, argued that the fight was stopped too early, so the action restarted.

The fight restarted and Kelly earned a second win. Does that mean he is 2-0 tonight?

Ben Moser successfully defended and retained his AOW bantamweight strap after defeating Eddie Doud unanimously on the scorecards.  The first round was back and forth.  Doud was on top when Moser reversed from the bottom.  Very close round.  Moser locked on a triangle choke in the second round and held onto it for most of the round.  He landed a lot of shots from the bottom and Doud was on the defense.  Moser was completely dominant in the third round.  He had mount, half guard, and a lot of ground and pound to win over the judges.

As previously mentioned the Pierre and Shields match was slated as a number one contender fight.  It did not take long for Pierre to prove he is that man.  Pierre landed a nice takedown, lands back controls, sinks in a rear-naked choke, and the fight is over in 40 seconds.  Shields protested the call, but Pierre gets the win.

Fight of the Night

Steve Myers vs. Kyle Cassell might be the fight of the nice thus far.  Cassell landed a nice jab and right hook that put everyone in the Lanco Fieldhouse on their feet. Cassell took the first round, while Myers took over in the second with a takedown and keeping control of the cage.  The third and final frame was really close and exciting.  The judges award the fight to Myers.

Carla Esparza vs. Yan Xiaonan targeted for UFC Fight Night card in May