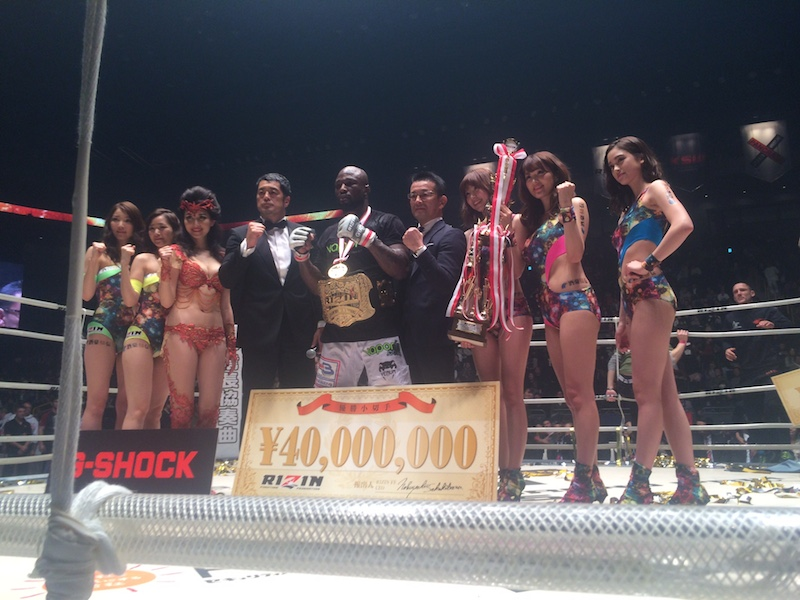 In the tournament final, Lawal dispatched Jiri Prochazka (16-3-1) from his senses at 5:09 of the first round. Prochazka, a tall heavyweight from the Czech Republic was very active on his feet throwing kick after kick, but Lawal managed his distance wisely and placed a perfectly timed right hand onto the jaw of his opponent, knocking him out cold.

Earlier in the night, Lawal defeated Lithuania’s Todoras Aukstuolis (8-3) by unanimous decision. He also finished England’s Brett McDermott (5-3) with a knockout victory two days prior, during the opening round of the eight-man tournament.

Bellator MMA welterweight star Brennan Ward (13-3) moved up to 185 lbs. to face Japan’s Ken Hasegawa (10-1-1), a fighter who has also competed fought at different weight classes in the past. During the first frame, Ward connected several times, dropping Hasegawa on multiple occasions. In round two, Ward displayed his dominant wrestling ability to gain position and sink in a rear-naked choke. “That dude was heavy, man,” Ward exclaimed. “He couldn’t keep me down, though. I busted him in his jaw twice and knocked him on his a—, but he was tough.” Heading into 2016, Ward will move back to 170 lbs. and continue his hunt for Andrey Koreshkov’s Bellator MMA Welterweight title.

“The Last Emperor” Fedor Emelianenko (35-4-1) made a triumphant return to the sport of MMA with an impressive first round victory over former K-1 champ Jaideep Singh (2-1) in front of a raucous crowd at the Saitama Super Arena in Tokyo.

The legendary Russian heavyweight was dominant from the start and electrified the New Year’s Eve crowd with a brutal ground and pound attack ending with a TKO at 3:03 of the first round.