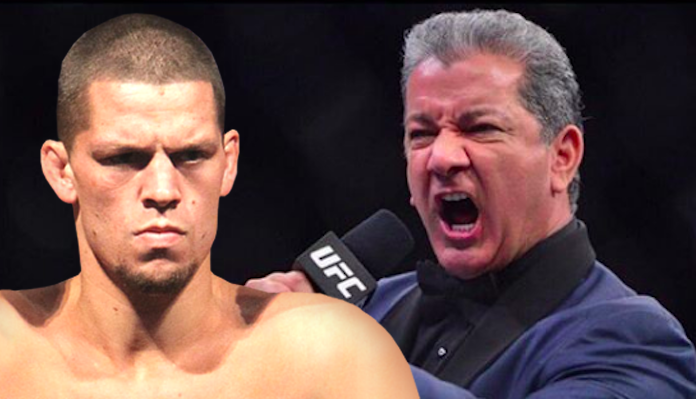 Over the past year or so, Nate Diaz has been add odds with UFC, be it over money, or Diaz allegedly turning down fights that don’t present the right benefits for him. Diaz has let it be know that he feels disrespected by the organization.

In his most recent act of frustration, Diaz went to his Twitter, and publicly stated his intentions to not fight Dustin Poirier due to what he felt was a slap in the face by the UFC in overshadowing his return to the octagon by making the announcement of the Nurmagomedov-McGregor fight at the end of the UFC 25th Anniversary press conference.

Several hours later, Diaz followed up with another candid tweet expressing his anger towards the company.

His latest comments have struck a bad nerve among the hierarchy of the UFC, but one man in particular who also works in a prestigious position in the organization, has been the most bothered by the Stockton Bad Boy’s actions. That man is none other than the voice of the octagon, UFC ring announcer Bruce Buffer.

In talking with  TMZ, Buffer said that Diaz should tone down on the issues he has with the UFC.

This was in reference to a comment Diaz made after the UFC 25th Anniversary presser in which he told the media he felt “under promoted by the organization.

Buffer claims he heard Diaz accumulated big money after his UFC 202 bout with Conor McGregor thus believing Diaz has no right to speak negatively about his employer.

“Nate, I heard you made 7 or more million dollars in your last fight,” Buffer said. “I don’t want to hear you complaining about being under promoted by the UFC. You should be thanking the UFC and bowing to Dana White every time you see him and [Endeavor co-CEOs] Ari Emanuel, Patrick Whitesell.

“You got 7 or more million dollars gross before taxes, maybe much more. Which I love knowing that you have, Nate. Please, I don’t want to hear any more complaints.”

Regardless of the initial tweet Diaz posted about backing out of his return bout with Dustin Poirier, he will indeed make his much-anticipated return to action against the lightweight contender at UFC 230 in the evening’s co-main event.

When asked about a possible Diaz-McGregor trilogy happening, Buffer stated it all depends on the outcome of McGregor’s  championship encounter with Khabib Nurmagomedov at UFC 229.

“I think we all want to see it, but I don’t think we can make determinations about anything until we see what happens between Khabib and Conor,” Buffer said. “This is a big fight. I don’t think in front of my guns — I think behind my guns. We’ll see what happens and then the marketing brains of the UFC will put together what the best thing is for the fans.”