Following a 6-fight win streak stemming back to his promotional debut in 2018, Arkansas country boy and UFC fan favorite Bryce Mitchell was finally positioned in the featherweight top-10 rankings back in March.

Journey to the top

Mitchell, 27, wasn’t thrown into the shark-infested waters of the UFC’s 135lb division as the Barata MMA student steadily progressed through the rankings to obtain the position he’s in today.

As a professional competitor of just seven years, this seemingly small amount of cage experience doesn’t reflect Mitchell’s in-cage performances. Whilst many have doubted him during the come up, he’s continuously proved those critics wrong with hard work, an evolving skill set, and a never say die attitude.

Interestingly, sportsbooks have rarely been overly confident in Mitchell’s likelihood of victory, as most undefeated up-and-comers are labelled with hefty price tags. Bookmakers pricing Mitchell since his debut in 2018 have only put him beyond a -160 set of odds on one occasion (vs. Charles Rosa).

For bettors combining these tempting “Thug Nasty” odds with Arkansas sportsbook promo codes, the returns on investment have been lucrative and, at the time of writing, have delivered six consecutive winning tickets for a 100% positive betting record.

After an authoritative performance over UFC veteran and highly skilled Brazilian striker Edson Barboza at UFC 272 earlier this year, undefeated (15-0, 6-0 UFC) prospect Bryce “Thug Nasty” Mitchell broke into the top-10 rankings (#9) and is now priming himself towards title contention.

The current problem for Mitchell is that he may be side-lined should he refuse a fight outside of the top-10.

The current landscape at 135lbs has almost every fighter scheduled for a bout in the near future, and unless Mitchell steps up as a short-notice replacement, it’ll be challenging for the Arkansas native to find a fight this summer. 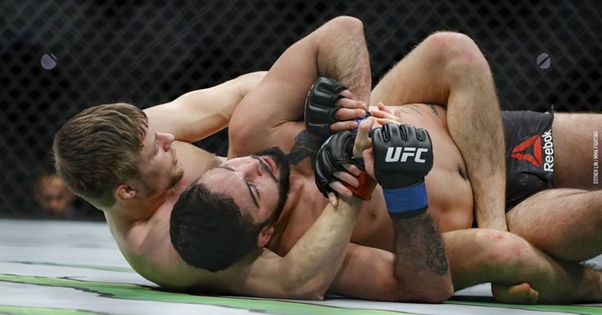 Mitchell vs. The Korean Zombie

One intriguing top-10 clash that has the potential to come to fruition is Mitchell and “The Korean Zombie” Chan Sung Jung. Jung (17-7, 7-4 UFC) fell victim to the sharp striking of current featherweight champion Alexander Volkanovski in his previous bout, as one of Asia’s most popular competitors was stopped short in his quest for UFC gold. And this name is a piece of matchmaking that Mitchell wouldn’t be opposed to.

‘Korean Zombie’ is the highest-ranked guy that I could possibly fight, and the reason that I believe that he is because he’s a two-time title contender,” Mitchell told Brendan Schaub. “He went and fought for the belt two times. There are other guys that are up there that are really high up. Ortega’s booked, Holloway’s booked, and other guys might be up there, but they didn’t fight for the belt twice.

“So, if you go in there and beat ‘Zombie’ better than most champs – Aldo and Volk beat him. I think it took Volk maybe two rounds. Say I go in there and beat ‘Korean Zombie’ in the first round; that would give me grounds to fight Volk immediately. I’d say I just fought the dude he fought and did a little bit better, and that would be the best fight.”

I don’t believe anyone – including the UFC matchmakers – could argue against this potential bout, and who wouldn’t love to see the only two fighters in UFC history with twister submissions go one-on-one?

Jung landed the first twister submission in UFC history, and Mitchell is the only other fighter to follow in his footsteps with a twister submission finish. “Thug Nasty” stopped Matt Sayles with the rare submission offense, and he’d enjoy going against the originator.

“I also think it’s twister vs. twister,” Mitchell said. “If one of us twister’s each other, that settles it right there on who’s got the better twister.”

Finalising the landscape, he said, “I want to fight for the belt, and I think I win all of them. I think whoever they put me in there with; I’m winning.”

#6 ranked Arnold Allen, #10 ranked Movsar Evloev, and #8 ranked Giga Chikadze are an additional three bouts the UFC could offer Bryce Mitchell. Still, in Allen’s and Evloev’s case, I’m not sure the promotion would want to damage the current run these men have been on by pitting prospect vs. prospect.