The promotion announced earlier today that George Hardwick (8-1) and Mehdi Ben Lakhdhar (5-0-1) will compete for the vacant lightweight belt at Cage Warriors 131 on Friday 10th December in London’s York Hall.

McColgan won the belt in dominant fashion at Cage Warriors 124 in June, outclassing Agy Sardari in the striking exchanges through the first two rounds, before submitting the then champion in the third. In doing so, the Fight Academy Ireland captain became the first Irishman since Conor McGregor to hold Cage Warriors gold at 155lbs.

In a press release, Cage Warriors president Graham Boylan explained that McColgan himself made the decision to relinquish the title due to an inability to train at the moment for personal reasons. However, there is a stipulation that will allow the 35-year-old Belfast fighter to compete for the strap on his return:

“Life has Joe McColgan busy and he’s just about got enough time to get into the gym to help his training partners get ready for their fights. Joe doesn’t want to hold the division up and has decided to vacate the belt providing he can fight the new champ on his return which he expects to be around April or May next year.”

“I have the utmost respect for the champ for allowing the division to move on in his absence.” Boylan added. 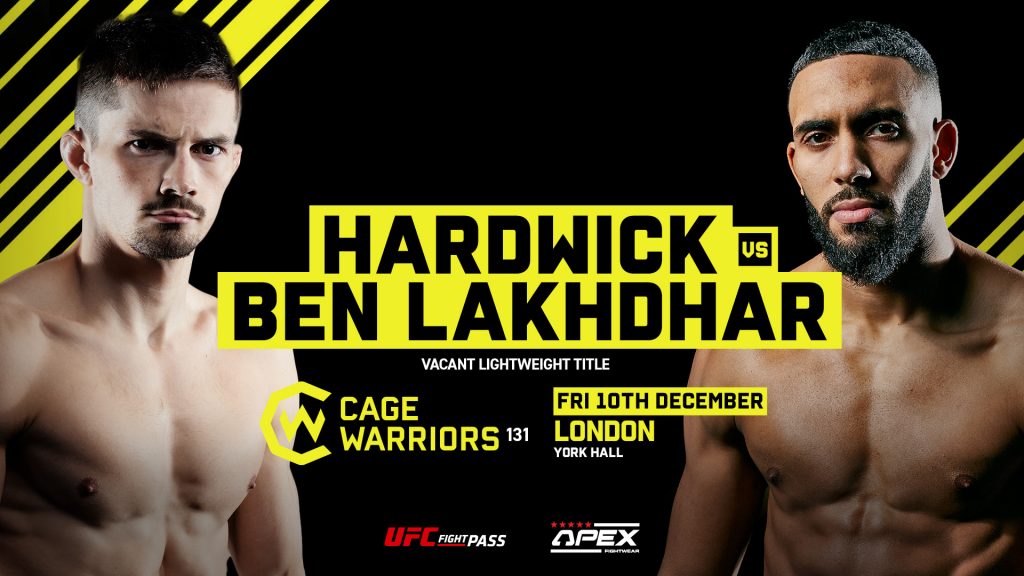 In the meantime, there is a cracking matchup on offer for the vacant title.

Fighting out of Middlesbrough alongside his brother Harry, George Hardwick has looked a fantastic prospect thus far in his pro career. Hardwick rides a four-fight win streak into this contest, his sole loss coming to Cage Warriors veteran Madars Fleminas in 2019. Since then, Hardwick notched impressive wins over Richard Kiely and Nicolo Solli in Bellator, before joining the Cage Warriors ranks this year. He made a statement in his promotional debut, stopping former champion Dean Trueman in the second round with a body shot, before going on to choke Jakub Dohnal at Cage Warriors 129 last month.

Standing across the cage from him on fight night, France’s Mehdi Ben Lakhdhar is a worth title challenger. The MMA Factory fighter is undefeated in MMA, with his only blemish (if you can even call it that) being a draw to the now former champion Joe McColgan in 2019. That fight was a war for the ages, picking up Cage Warriors fight of the year. Ben Lakhdhar returned with a brutal first-round KO of Stevie McIntosh late last year, but hasn’t fought since. “The Last Uchiwa” will be looking to overcome Hardwick and set up a sequel with McColgan, this time for the belt.

Cage Warriors 131 will be streamed LIVE on UFC Fight Pass.