At 34 years of age and after sustaining what could have potentially been a career ending eye injury, ‘Big Kansas’ Daniel Gallemore has found a way to continue on in combat sports competition.

Gallemore, a former Victory Fighting Championship heavyweight champion, boasted a professional mixed martial arts record of 7-6, where he competed in other notable promotions such as Titan FC, Bellator, and in the Professional Fighters League.  The Kansas state native, now living in Colorado, will now divert his attention from MMA and focus on professional kickboxing.

“With kickboxing it is big gloves,” Gallemore said of the adjustment. “So I’m not going to get clipped by one of these little gloves like in MMA. No getting poked in the eye, none of that stuff is gonna happen. There’s always a small chance of a Cat Zingano toe nail to the eye type of deal, but the chances of that are slim to none.”

“There’s more longevity in boxing and kickboxing for the heavyweights,” he said. “Boxers my age are in their prime right now.  I’m not gonna go for a WBA title or anything like that but I can still make some money playing punchy face with the big gloves.”

Although Daniel Gallemore isn’t completely ruling out a return to MMA, it is not something he is looking to do for little reward.

“I would go back to MMA if it paid really well. There was some chitter chatter about me fighter Jake Hager. After seeing his last two fights, I don’t know that I want to fight him. The reason I’m not doing MMA is because of a potential injury to my eye and…. he’s dirty man. I could see somebody like that intentionally poking me in the eye and then playing it off, just like he did hitting my buddy Anthony Garrett intentionally in the balls (Bellator 231), and then was like ‘oh I didn’t know.’ Yeah right. They just told you to bring your knees up. And then you did it again.”

This Saturday, November 9, Gallemore enters an 8-man heavyweight kickboxing tournament at XFN 363 from the River Spirit Casino Resort in Tulsa, Oklahoma.  The event will be broadcast live via UFC Fight Pass. 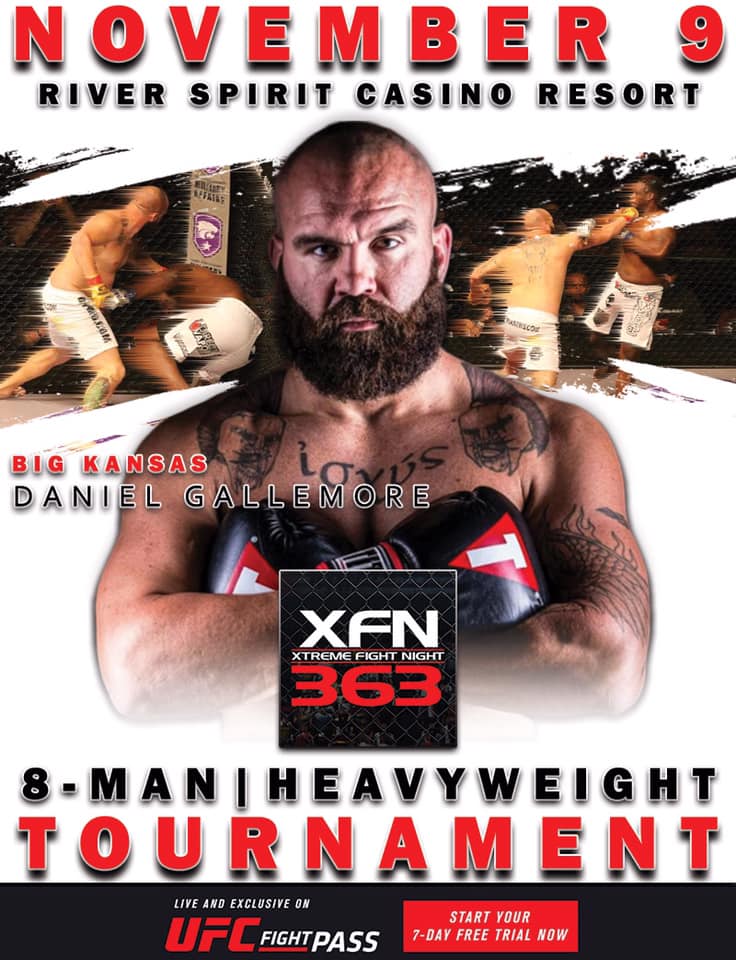 Seven men have also entered their names into the tournament, with an additional two serving as reserves in case of injury. Haze Wilson, Rasheem Jones, Chris Barnett, Tony Lopez, Eric Lunsford, Jefe Hodges, and Darion Abbey are potential opponents at some point that evening.

“The match ups are usually done in a draw at the weigh-ins, but we are still considering options,” Cook said.

The tournament quarterfinals will be sanctioned for three rounds with a two-minute time limit per round.  All other bouts are scheduled for three minutes.  There can be no draws, and there are no elbows permitted.

As added incentive each competitor will earn $500 for every knockout and have the opportunity to score an additional $1000 for knockout of the night. 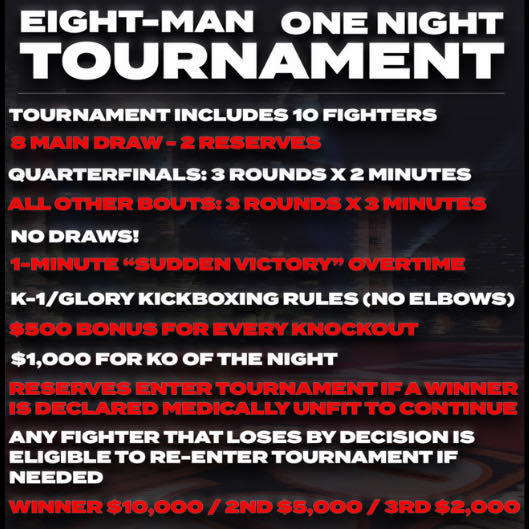 Luck of the Draw

Who will Gallemore face first?  Better yet, who would he want to face first?

“Man, I don’t know who I would want to face first,” he said.  “Chris (Barnett) is very well known. A fight with Haze (Wilson) has kind of been a long time coming.  He’s the big guy from Oklahoma, I’m the big guy from Kansas.  I don’t have any bone to pick with him or anything.  I don’t have any dislike for him.  I don’t know him.  I don’t really know who would be first.  Maybe Chris just because he is unorthodox.  I would want to be fresh, not get caught with my hands down.  He’s one of those guys that will throw something wild with a ton of power.  I don’t know, maybe I’ll want to fight him in the second round too because my cardio might do better.”

Who is the toughest in the tournament?

“Probably Chris (Barnett),” Gallemore said. “I really don’t know the foreigner side of it though.  There’s four Americans on one side, four foreigners on the other side.  I’m not really sure about those guy.  Chris was a late addition, Tony (Lopez) was also.  That wasn’t the original lineup when I signed up.  But it does make it a lot more interesting.”

What are you going to do with all the money you win?

“I’ve got bills to pay.  I’m walking away with all the bonuses. Christmas is coming up.”

In order to prepare for the contest, Gallemore is now working with Steve Paprocki.

“He’s fought for GLORY a few times,” Gallemore said of his new coach. “His wife Kathryn has fought for Invicta.  He’s got a small gym.  I’m glad to have him.  He’s got the time.  He’s not booked to the gills with guys who are making six-figure fights.”

The big man from Kansas says he has remained injury free during camp, something he is not used to.  As a result, Gallemore has been able breeze through his training sessions, feels good, and remains confident.

“Two minutes rounds are so short in training when you’ve been doing fives for so long.  It goes fast.  Going 3-0 in this thing will be a hell of a way to kick off my kickboxing career.  Beating Chris and Tony, or at least one of them, you can’t ask for better than that.”