Mixed martial arts legend, perhaps the greatest fighter ever to have never won a belt, Donald Cerrone will be returning this spring opposing a fellow longtime veteran, and legend in his own right, Joe ‘J-Lau’ Lauzon.

This is such an incredible example of matchmaking at its finest, and it is to go down at UFC Fight Night 208 on April 30, 2022. 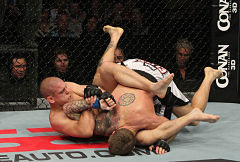 Not to mention seven Fight of the Night awards.

Along with that, Lauzon also holds the record for most finishes in UFC lightweight history at 13. For instance, UFC lightweight champion Charles Oliveira is sitting comfortably at 12. It’s extraordinary Lauzon still holds this record.

That’s not even the brunt of it. 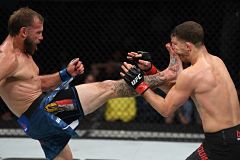 As mentioned above, Cerrone is tied with Oliveira for the most post-fight bonus awards, with 18. Lauzon is tied at second place with Nate Diaz, boasting 15.

That’s quite a list, huh? These two are absolute legends of the UFC, and especially, the 155 lb division.

Lauzon came to the UFC in September of 2006 to stop former UFC lightweight champion Jens Pulver via KO in one of the most impressive UFC debuts ever. He then, surprisingly, decided to join The Ultimate Fighter 5 cast.

After going 2-1 on the show, Lauzon would quickly rack up two more victories in the octagon.

Mind you, by this point, he’s 16-3, 3-0 in the UFC, and his only defeats came to Jorge Masvidal, Ivan Menjivar, and Raphael Assuncao. Talk about tough competition early on!

Lauzon was then stopped by multi-division title challenger Kenny Florian, before winning his next two. His career has gone pretty back and forth from here on, but there are so many stellar fights and performances he’s had since.

Donald Cerrone on the other hand got his start in the WEC, coming over to the UFC as a former title challenger with a record of 13-3 (1 NC), the same record Lauzon made his debut with, minus the no contest.

The first of those three defeats came to then champion Jamie Varner, and the other two came to Benson Henderson, both of which were also title fights. 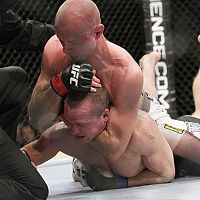 He was also on a two-fight win streak coming over, one of which saw him avenge his loss to Varner.

Next he’d win eight-straight en route to a title shot, where he was again defeated by dos Anjos.

Cerrone then moved up to the welterweight division, winning four-straight there as well.

The most impressive of these were his wins over Patrick Cote (TKO), Rick Story (TKO), and Matt Brown (KO).

Cote had fought as high as light-heavyweight before, and had even challenged Anderson Silva for his middleweight championship, but hadn’t ever been finished with strikes. Cerrone, the much smaller man, did that handily.

Same with Story, he’d never been finished with strikes and had wins over guys like future champion Johny Hendricks and former title challenger Thiago Alves. He’s as durable as they come, and Cerrone again handily finished him.

Brown hadn’t ever been knocked out either, and he did it with a head kick in the third round. Cerrone at his best was a truly special, one-of-a-kind fighter. 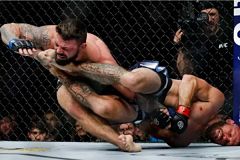 He didn’t even get his first knockout win in MMA until his 16th victory, which is just remarkable to think about; 12 of his first 15 wins came via submission, the other three via decision, and he got his start in kickboxing, going 28-0-1 in the sport as a professional before turning to MMA.

Cerrone would go 1-4 over his next five, before leaving the division with a win over Mike Perry.

Next would come a two-fight win streak upon arriving back at lightweight, which has been halted abruptly. Cerrone has now gone winless in his last six outings (0-5-1), starting with a defeat to former interim champion Tony Ferguson.

This has left many of us to believe Cerrone’s career may end in this year of 2022, and if that is true, this would be the perfect swan song for both himself and Lauzon. 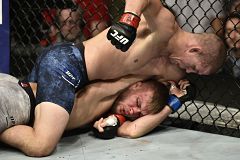 ‘J-Lau’ ended a three-fight losing streak himself in October of 2019, TKO’ing his opponent dominantly in the first round in front of his home crowd of Boston, Massachusetts. That was that last time we saw him fight.

Both of these men have as dangerous of an offensive submission game as exists in the sport today, and they’re both good on the feet as well. Cerrone of course is a dangerous kickboxer, while Lauzon likes to get on the inside and use his hands more.

One of those instances showed him knock Diego Sanchez out at UFC 200. The iron-chinned Diego Sanchez, who at that point still hadn’t been knocked out, Lauzon did that in just 86 seconds.

A full list of who each man has beat since signing with ZUFFA:

As you see, they have a few common opponents, three to be exact. They each defeated Jeremy Stephens, Melvin Guillard, and Jamie Varner. They also have common opponents they both lost to.

Both were TKO’d by Jorge Masvidal, each being finished with his vicious hands, and both were knocked out by Anthony Pettis, Lauzon with a head kick and Cerrone with a body kick.

Lauzon went 0-2 against Jim Miller, someone Cerrone finished, though he could’ve handily gotten the nod in either fight, both were quite close. Lauzon also lost to Al Iaquinta and Evan Dunham, both of which Cerrone has defeated.

What a career these two have had!

How do you see this epic lightweight affair going down?