Until now, the UFC did not have a women’s featherweight division. Cyborg had fought her last two fights at a 140 lb., catchweight and it seemed she would ultimately find herself in the title picture when the UFC did bring the division about.

According to White, Cyborg turned down both offers, but she states that she did not necessarily turn them down, she just wanted to wait until March to fight.

In a recent statement to MMA Fighting, Cyborg explained that she needed 12 weeks to properly cut down to 145 pounds and that she was eyeing a return to the cage in March.

“I told [the UFC] I can fight anyone in March, but I need to take care of my body,” Cyborg said. “And no mention of the fact that I’m dealing with severe depression and can’t have another brutal weight cut like before. This decision is more important than the belt or the division, I’m thinking about my health.”

Since then, news broke that the inaugural UFC women’s 145 lb., belt will be contested at UFC 208 at the Barclays Center in Brooklyn, New York.

Germaine de Randamie (6-3) and former UFC women’s bantamweight champion Holly Holm (10-2) will fight to determine who gets the crown. 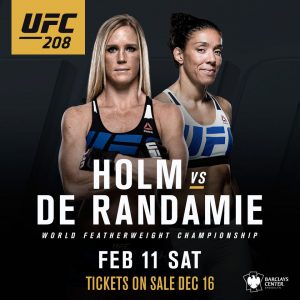 It may seem odd that Holm gets a title shot coming off back-to-back losses, but nonetheless, she finds herself right back in the mix of the title picture, a new title that is.

Holm lost the 135 lb., belt in March when she was submitted by now former champion Miesha Tate at UFC 196.  She then lost a unanimous decision scrap to Valentina Shevchenko in July.

Holm is currently ranked as the number four women’s bantamweight, while her opponent, de Randamie sits at number 11.

De Randamie is 3-1 since coming to the UFC in 2013.  Her first fight was a split decision win over the now retired Julie Kedzie, followed by a TKO loss to the current champion Amanda Nunes.

In 2014 De Randamie was completely absent from the fight game, but then gained a 2015 win over Larissa Pacheco and a win over Anna Elmose in May of this year. She was then scheduled to fight Ashlee Evans-Smith in Germany but pulled out due to injury.

So, as you can see the new division’s title is not exactly being contested by fighters that are ranked atop the 135 pound division, and with Cyborg out of the mix, many mixed martial arts fans find the pairing to be puzzling.

Who wins in Brooklyn on February 11, Holm or de Randamie?