Kaheem Murray is the nice guy you meet and talk to and say to yourself, there is no way this guy is a fighter.

He is a kind, soft-spoken gentleman who says in his last fight “Something inside me just clicked.”

Murray is talking about his recent fight at Stellar Fights where he defeated Branden Hudson via second round ananconda choke submission.  Hudson did not tap, instead he went to sleep and Murray had his arm raised in victory.

“Everybody gets pre-fight nerves, but this last fight, I was the main event against an opponent who sold well over 300 tickets. I got booed really bad and I fought the best fight I ever fought.  Sometimes I fight a little uptight. I always have regrets after my fight. but I’m not going to think too much. Going forward, I’m going to fight to my full potential.”

The Dream has been training at both Renzo Gracie (Philly) where he rolls with some formidable competition like Sideco Honor and Daniel Gracie as well as the upstart Hands Up Studios with Jake Skelly.  Jake works on his all-around game and is a veteran of the cage himself.  Skelly and Dave Nelson will be working the corner for Kaheem as he tries for his sixth win.

“My goal is to win this fight and take one more before I try to make my pro debut in the latter part of 2017, hopefully for WCC. They have been good to me.”

This coming Friday, December 2nd, Murray will try to take what he has recently learned into the cage 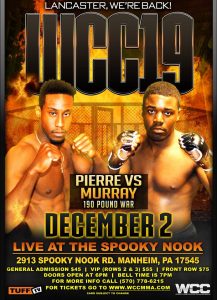 at WCC 19 from the Spooky Nook in Lancaster, PA to take on the lesser experienced but still unbeaten (2-0) Bart Pierre.

“I actually went to Crush Crew for a while and did roll with Bart. He did tap me out once but there is no way he has the experience to beat me in this fight.”

Kaheem tells us that his wrestling is much improved but he is definitely considered a striker who is not afraid of wherever the fight may go.  He’s been training a lot of jiu-jitsu and feels like this is his time to shine.  Murray wanted to thank his family, friends and co-workers for all of their support.

The fight game is a grind and selling tickets consistently is sometimes a task in itself.  He has the right attitude. Next week, we will see if it is enough to have his hand raised.