Coming off a fight with Jessica Sotack that resulted in a draw at Bellator 182 last summer, Kristi Lopez is eagerly waiting the call for a second fight with the organization. “Loba” Lopez was a contestant on season 23 of the Ultimate Fighter, earning the opportunity with only two professional mixed martial arts bouts to her credit. The flyweight competitor wit a 2-0-1 record caught up with Tony Reid of MyMMANews.com to discuss her career.

Tony Reid – Bellator is really repping WMMA. There were a record five women’s fights on the Bellator 182 card. What are your thoughts on being a part of such a historic event and the continued showcase of the women of the sport?

Kristi Lopez – “I think it’s amazing to be a part of a record breaking event. It’s a really cool time to be a female MMA fighter. I’m so grateful to Bellator because they are doing such a great job of repping women’s MMA. It’s been a long road for a lot of us. I was really excited an honored to be a part of the card. It’s great for future female fighters to look up and see and present a strong female image for future fighters. Girl power!” 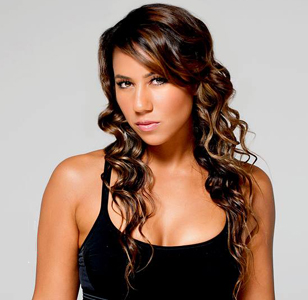 TR – There was a huge wave of women signed by Bellator recently. What are your thoughts on the talent pool and the opportunity to test yourself against the great fighters…and then maybe leading to an eventual title shot?

KL – “I would love that. That is the goal. You really want to be able to know in your heart that you are the best. That is what I am gunning for. I have never had a belt. I would love, love, love to have the Bellator Flyweight title. That would be a dream come true.”

TR – You are a big believer in the journey. What are your thoughts about this current journey? Who or what inspires you to continue down this road?

KL – “You should always test yourself. You should always live a little outside your comfort zone. Otherwise, you don’t really find out what you are made of or who you really are. If you always stay where you are comfortable or safe…sometimes I ask myself why I chose such crazy hard things to do. That’s why a lot of people like to watch fighters and fights. You are seeing a representation of someone’s heart and spirit on display in a physical form. They are just using the form of fighting to show their spirit. I have done a lot of reading on martial arts and philosophy. The whole thing is very honorable to me. To train your body and mind, my journey I went through some hard times. I learned that everybody has hard times. I am grateful for what I have. Every single day I am grateful. Really martial arts became a way for me to have a healthy outlet. I recommend that to anybody going through anything. Get involved in a sport. Boxing, Jiu Jitsu, it’s a really positive and healthy way to get though anything you are going through.

“I lost one of my brothers in an accident. After that it was really hard for me for a really long time. I really struggled. With the help of my family and finding martial arts I was able to channel everything into a healthy positive avenue. I really good message is that you can get through it. Even of you don’t know how you put one foo tin front of the other and keep going. That is a really important part of the journey for me. Just keep going. No matter how many times you get knocked down you get back up and keep going.”

TR – On your social media you list yourself as “Sophisticated Savage”. What does that mean exactly?

KL – (Laughs) “I love that saying because I have two very different sides to me. I love being a lady and being a woman. I have two Bachelor’s degrees, one in art and one in nursing. The savage part is that I really love to punch people in the face, too. I love the raw side of it, the real side of fighting. I am a renaissance woman right down the middle. Half of me loves getting dressed up, art and movies and the other side loves blood and the thought of grounding and pounding the shit out of somebody.”