Nick Browne wrestled his way to a unanimous decision win against Arthur Estrazulas, capturing the vacant lightweight strap at LFA 97 on Friday, Jan.  16.

Both men looke dcontent to stand early on, but Browne used his cardio and ground game to his advantage inside the Hartman Arena in Park City, Kansas.

Browne makes his third LFA appearance following a a three-fight win streak. He most recently earned a unanimous decision win against Ben Egli at LFA 87 in July. His only other promotional win is a first-round rear-naked choke against Trey Ogden at LFA 76 in September 2019.

Brown’s only professional loss is a unanimous decision defeat to “The Ultimate Fighter” season 27 member John Gunther back in 2017.

Like Browne, Estrazulas is unbeaten inside the LFA cage. He is on a two-fight win streak with back-to-back rear-naked choke victories against Dominic Clark and Steve Kozola.

Training out of Kings MMA in California, Estrazulas’  most recent defeat came by a split decision to former UFC lightweight Thiago Tavares at PFL 5 in August 2018.

Lightweights are trending at LGA 97 as Jacob Rosales and Jose Martinez meet in the co-main event.

Follow along to see all of the highlights and results of LFA 97. 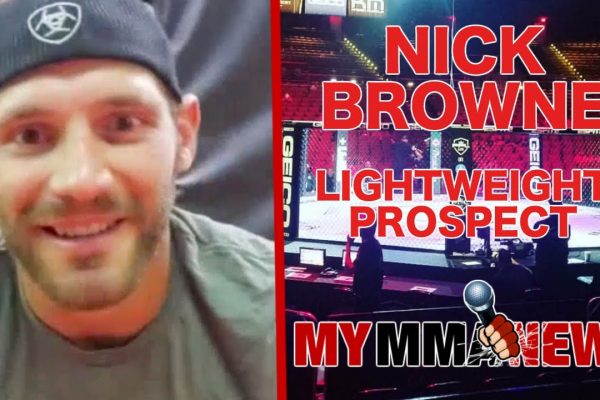 Thomas Petersen caught Richard Luis with a left cross that immediately put his opponent to the floor. The referee immediately stepped in just 19 seconds into round one.

It just takes one punch in this division! #LFA97 pic.twitter.com/U5Js8yLtua

Josh Quinaln just kept at it.

Quinlan put together a complete performance, out striking Joe Boerschig. The fight eventually went to the ground where Quinlan finished Boerschig via third-round TKO.

Both men went right to work in round one. Boerschig tested Quinlan early by pressuring Quinlan on the feet, mixing up his strikes with punches and kicks. Boerschig even scored a takedown. Quinlan spent the rest of the round getting the better of strike son the feet. All three judges score the first round 10-9.

Quinlan established his leg kicks in round two. Quinlan used majority of the round to pick apart Quinlan on the feet, getting the better of the exchanges. Boerschig is slowing down after Quinlan lays on the leg kicks. Boerschig established the jab and mixed up his kicks more. After a close second round, Quinlan takes the second round 10-9 on all three judge’s score cards.

Boerschig earned a takedown early, but Quinlan transitioned to the top position. Boershig took a lot of punches from the bottom position. Quinlan poured on the strikes and earned the third-round TKO in round three.

After losing the first round, Michael Stack came back to finish Jordan Mapa on the ground.

Stack stuck to the script and earned a takedown in round two. Stack controlled most of the round by scoring ground and pound. Stack pours on the strikes from above and gets the second-round stoppage.

Young showcased her power on her way to a second-round knockout against Kelly D’Angelo.

Young outpointed D’Angelo on the feet in round one. All three judges score the first 10-9 for Young. Young threw with a lot of power in round two.

Young hurt D’Angelo and eventually put D’Angelo down for good with a right hand. Young moves to 3-1 and D’Angelo drops to 4-4.

This one is over! #LFA97 pic.twitter.com/FrfznJkEOG

Kirk ended a two-fight losing streak by finishing Guilherme Santos on the feet.

Kirk picked apart Santos and eventually walked his opponent down with a first-round TKO victory. Kirk improves to 10-4 and Santos falls to 8-4.

Jacob Rosales dominated Jose Martinez on his way to a unanimous decision victory.

Martinez beat the clock in round two after Rosales poured on the strikes at the end of round two. Rosales dominated the round, but did land a unintentional knee to a grounded opponent. The referee did not see it, but the commission reviewed it later. Rosales was given two 10-8 scores, but one judge goes as far as giving the round 10-7 to Rosales.

Rosales showed signs of slowing down in the third, but still did enough to take the fight. Martinez showcased some serious toughness. Rosales moves to 13-6 and Martinez drops to 11-5.

Nick Browne out wrestled Arthur Estrazulas on his way to capturing the vacant lFA lightweight title.

Although both parties traded their fair share of low kicks, Browne outlasted Estrazulas in a unanimous decision win.

Both men kept in close int he opening round. Estrazulas and Browne mixed the striking up in the first. Browne landed more late, possibly could have stolen the round.

Both men traded leg kicks early. Browne used his wrestling more int he second and scored two takedowns. Browne looked to be gaining momentum when Estrazulas landed some hard shots. Browne clinched to the the round. The fight is 19-19 going into the third.

Estrazulas put Browne to his butt with a right hand. Browne jumped into survival mode and shot for a takedown. Estrazulas defends as Browne eventually drags Estrazulas to the floor. Estrazulas rose to his feet, but Browne scored another takedown later on. Estrazulas was consistent on getting back to his feet. Browne not hiding his gameplan, continued to shoot on Estrazulas. Two judges score it 29-28 for Browne with one 29-28 for Estrazulas.

Browne looking for low kicks early. Browne took the fight to the grown and landed some heavy ground and pound. Browne remained on top and finished the fifth round by attempting a rear-naked choke.

Official decision: Kamuela Kirk def. Guilherme Santos at 4:25 in round 1.

Official decision: Loveth Young def. Kelly D’Angelo via TKO at 1:36 in round 2.

Official decision: Michael Stack def. Jordan Mapa via TKO at 4:00 in round 2.

Official decision: Thomas Petersen def. Richard Luis via KO at 0:19 in round 1.

Official decision: Shane Shapiro def. Cam Ansel via submission [keylock] at 1:44 in round 1.