News broke this morning of the Myanmar Traditional Lethwei Federation (MTLF) banning Canadian Dave Leduc from international competition and the country of Myanmar. In a press release, MTLF said that comments made about Thai boxer, Buakaw, and about Muay Thai in general. The news was first reported by James Goyder, which you can see below.

The Myanmar Traditional Lethwei Federation has declared that Dave Leduc is no longer allowed to enter Myanmar, compete in Lethwei or represent Lethwei pic.twitter.com/aa04ICCQ0p

See the press release from the MTLF on Dave Leduc below as well. 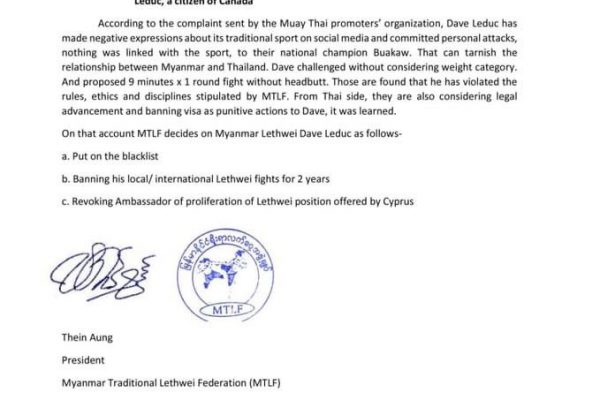 According to the complaint sent by the Muay Thai promoters’ organization, Dave Leduc has made negative expressions about its traditional sport on social media and committed personal attacks, nothing was linked with the sport, to their national champion Buakaw. That can tarnish the relationship between Myanmar and Thailand. Dave challenged without considering weight category. And proposed 9 minutes x 1 round fight without headbutt. Those are found that he has violated the rules, ethics and disciplines stipulated by MTLF. From Thai side, they are also considering legal advancement and banning visa as punitive actions to Dave, it was learned.

a. Put on the blacklist

In recent weeks, Dave Leduc has launched a barrage of assaults on Buakaw, his character, Thai boxing, and the history between the two sports. Leduc alleges that Muay Thai and it’s founders stole the sport from Myanmar and grew Muay Thai out of an opportunistic position.

As for the talk with Buakaw, Leduc called him out to represent Thailand and proposed a modified ruleset for the fight he was floating. He then called out Buakaw for lawsuits against him for child support. While this is often overlooked in the western world of combat sports, attacks on character are not accepted in the east.

As an observation, some of the grammar in the release seems off, specifically the email at the top ending in “gmial.com.” While James Goyder is verified and reputable, it raised some concerns about the release. The grammatical issues could also be related to poor translation or ESL issues. But, with Goyder’s track record, I went ahead with the story anyway.

Dave Leduc: The Ambassador of Lethwei

Dave Leduc has built his name on growing the sport of Lethwei internationally. After appearing on the Joe Rogan Experience in October of 2019, popularity of Leduc and Lethwei exploded, as one could assume. Leduc leveraged that attention to grow the sport around the globe and even managed to compete in the first ever sanctioned Lethwei fight in the United States.

My MMA News reached out to the Myanmar Traditional Lethwei Federation and Dave Leduc for comment. No response was given at the time of this writing.