Imagine this if you will, professional wrestler and monster of a man, Ryback, transitions to mixed martial arts, signs a contract with Bellator MMA and fights fellow heavyweight and former pro wrestler, Bobby Lashley. 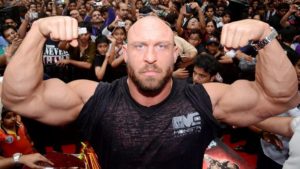 Ryback appeared on X1075 in Las Vegas where he revealed that he’s open to the idea of competing in MMA and has been in negotiations with Bellator.

“Spoke, but nothing close,” said Bellator CEO Scott Coker of negotiations with Reeves.

Sounds like there is still work to be done.

In an episode of his podcast, released on September 12, 2016, Reeves stated that he was in the process of trying to legally change his name to Ryback Allen Reeves in order to be able to continue using the name Ryback following his departure from WWE. It was announced on September 22nd that he was successful in changing his name to “Ryback Allen Reeves”, thus allowing him to use the Ryback name.

One of the eight finalists on Tough Enough 4, Reeves later signed a developmental contract with World Wrestling Entertainment (WWE) and wrestled in its developmental territories Deep South Wrestling (DSW), Ohio Valley Wrestling (OVW), and Florida Championship Wrestling (FCW).He participated in the first season of NXT in early 2010 under the ring name Skip Sheffield, and joined the main WWE roster later that year as part of The Nexus before being sidelined due to injury. Following his return as Ryback, Reeves headlined several pay-per-view events for WWE – some of which were for the WWE Championship – and became a one-time Intercontinental Champion before his acrimonious departure from the company in 2016.