Shogun Fights 15 brings a night of excitement to Charm City 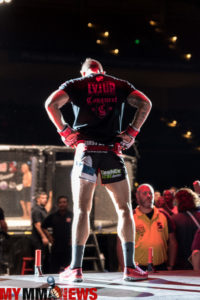 Baltimore, MD: Fight fans from all around the area filled Royal Farms Arena in Charm City for Shogun Fights 15. As you sat in your seats, you could feel the energy that was charged by the big time event atmosphere. The majority of the all pro card was filled with local fighters from the Maryland area, but the show that Shogun Fights put on made fans feel as though they were at a UFC event in Las Vegas. With a fog filled runway and a jumbo tron showing all the action, Shogun Fights left nothing to the imagination of an MMA enthusiast.

The night kicked off with a quick first fight in the 135 pound division between Terry Barholomew and Latif Idris. Bartholomew made quick work of Idris ending the fight with an Americana in only 50 seconds of the first round.

The second fight between Rob Sullivan and Shaun Spath left the crowd in shock as the fighters left the decision in the judge’s hand. Spath squeaked out a split decision win that was contrary to all the booing fans in the arena.

The night went on with great fight after great fight. Jesse Stirn pulled out a last second victory over Nathan Jamie by way of triangle choke with only one second remaining in the second round. Fan favorite Binky Jones finished his fight via rear naked choke against Nick Bleser at 4:07 of the first round.

In the middle of the card was an intense match between Kevin Chung and Jeremiah Scott. Scott landed a solid knee to Chung’s face in the first round leaving Chung stunned momentarily. Chung was able to regain his composure and make it out the round. In the second, Chung took the round by throwing an onslaught of strikes inside of Scott’s full guard. The third round, both fighters came out swinging. Scott landed a flurry of strikes on Chung, but Chung took the fight to the ground and put on a ground and pound clinic to Scott to secure him a unanimous decision.

During the ninth fight of the night between Rodney Jordan and Pete Petties the crowd started getting restless. The fighters danced around for the first two rounds feeling each other out and spent a lot of time pressed against the cage. The crowd woke up though when Petties connected with a jumping front kick to Jordans face knocking his mouthguard out and knocking him to the mat for good. Petties was victorious by KO at 1:20 of the third round.

The super heavy weights stole the show and Ryan McGowan receives my KO of the night. Both Rashaun Jackson and Ryan McGowan showed up to fight. This wasn’t your typical super heavy weight fight. These two mountain sized men were just as athletic as the lightweights. From the opening bell, the fighters came out swinging. At 2:54 of the first, McGowan landed a hulk like right to Jackson’s head that took all the life out of Jackon’s body. Jackson timbered to the mat and the fight was called.

Both main events were for Shogun Fights titles. The first was for the welterweight title between Jon Delbrugge and Chauncey Foxworth. The fight went the distance and Foxworth’s tenacity and ground control gave him the new crown in the 170 pound division.

The last fight of the night was for the 155 pound lightweight title. Cole Presley challenged the current champion Rob Watley. Watley connected a series of strikes in the first round and when the fight went to the ground, Watley took control. The second round was filled with Watley in and out of Presley’s guard.   Watley rained down strikes while Presley attempted submission after submission. The third was more of the same. At one point Watley was in trouble when Presely locked in a deep triangle and almost submitted Watley. Watley managed to escape Presley’s grip and the two remained on the ground. Watley continued to throw all the strikes he could at Presely in between Presley’s submission attempts. The attempts weren’t enough and the judges unanimously decided that the title should remain in Watley’s hands.

Shogun Fights raised the bar for local shows. The great fights and amazing production puts them on top of their competitors on the East Coast. Look out for Shogun Fights 16 coming spring of 2017.

Hey MMA fans! I’m Shaun from Woodbridge, Virginia. I am a full time police officer in Washington, DC and an amateur photographer. I started Martial Arts when I was 5 years old and continued training in Tae Kwon Do and Tatsudo until my late teens. I then found Muay Thai and Brazilian Jiu Jitsu which led to MMA. I went 2-2 in the cage, winning my last fight. Unable to fight again due to medical reasons, I decided to get a real job and become a cop. I have been out of the fight game for a long time and got into photography. I decided what better sport to photograph than MMA, plus I know the sport very well. I hope to be able to get to shoot as many MMA events as I can and share my work to the world. Check out my portfolio at www.sdhphot.net and follow me on Instagram @sdheffelman_photo