After hosting a successful event in Philadelphia, Pennsylvania, World Cagefighting Championships will once again bring their mixed martial arts talents to a new venue.

This time around fight promoter Doug Yasinsky will take the promotion to Manheim, the home of largest indoor sporting complex in the United States, the Spooky Nook.

The company owes its name to its location on Spooky Nook Road. Locally, the road is affectionately referred to on a regular basis, and the founders thought it made for the coolest sports brand around!

Spooky Nook Sports is a unique destination for sports, entertainment, and events.

The facility features a wide variety of indoor/outdoor fields and courts and hosts local, regional, and national tournaments and leagues.

Other components include the Warehouse Hotel, Forklift & Palate Restaurant, pro shop and an All American style food court. For more information, visit SpookyNookSports.com. 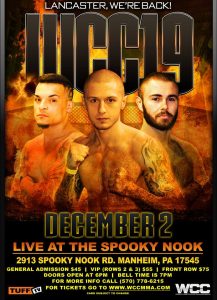 The lineup is still being built as matchmaker Mike Bickings is hard at work, however we do know that Zak Kelly will be looking to make his second professional mixed martial arts appearance at 155 pounds.

Also, Blaine “Shuttdown” Shutt looks to bounce back from that WCC 17 loss to top-ranked Desmond Moore.

Shutt (5-2) as a pro is one of the flyweight division’s rising stars.  He was on a four-fight win streak, all with WCC before the decisive title fight loss to Moore.

Also, after three consecutive fights with Gospel Uche under the WCC banner, Mike Serrano will make his professional mixed martial arts debut taking on Steven Jones.  Serrano amassed a (9-14-1) amateur MMA record, most recently losing his title to Uche via unanimous decision back in August.