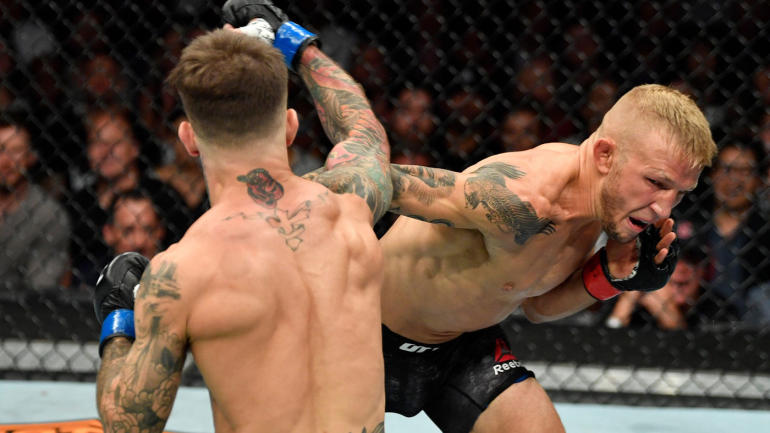 TJ Dillashaw maybe the best bantamweight fighter of all time. At least that’s the buzz around MMA circles after he retained his title against former champ Cody Grbrandt in the main event of last night’s UFC 227.

The Duane “Bang” Ludwig protege first defeated Garbrandt back at UFC 217. Dillashaw said after that fight that he believes “No Love” has no chin, a sentiment that he echoed in last night’s post-fight press conference in Los Angeles, Califonia.

“I think he has some technical problems that he needs to fix,” Dillashaw said. “And I really don’t believe he’s got a chin. He plays a dangerous game. He likes to get in there and he likes to slug it.”

Just like the first time these two fought, Garbrandt had his moments. He clipped Dillashaw in the early going of round one, but history would repeat itself as Dillashaw came firing back and ultimately ending “No Love’s” night.

Dillashaw now holds two victories over Grbrandt. All but assuring Cody wont get another title shot anytime soon, so long as TJ is champ.

The two-time bantamweight champion also addressed the long drawn out beef with Garbrandt, a feud that the champ believes was overdone in the media.

“It wasn’t anything in sparring,” Dillashaw said. “Cody was coming into the team as I was leaving, so we didn’t really get to work out as much as has been in the media. It was more when I hit him in the first fight with my foot. I dropped him with that left kick. I didn’t feel like that left kick had anything on it, but it affected him.”