UFC fans – there are 99 women who crushed it this year for AskMen’s official “Crush List”. Three of whom are some of the biggest stars in the UFC: Ronda Rousey, Holly Holm and Miesha Tate.  Also, rising star Michelle “Karate Hottie” Waterson…… and Gina Carano.

Here’s your chance to vote 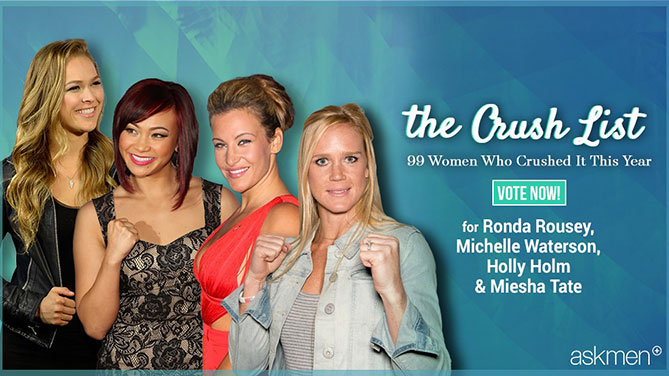 Noun. (\ˈkrəsh\) Someone you have a crush on. The object of one’s interest. Someone you can’t stop thinking about. Ex: Damn, I have such a crush on her.

Verb. To kick ass at something; to own it, dominate it, ace it. Ex: Damn, did you see that? She totally crushed it.

List: Noun. A collection of 99 incredible women who kick so much ass at what they do that we can’t stop thinking about them.