Aaron Pico has really come into his own as of late, learning how to mix it up and become an effective, dangerous mixed martial arts fighter. As he said before, he knew how to box, and he knew how to wrestle, but he didn’t understand how to fight. Since moving to Jackson’s MMA about a year ago, he’s learned to do just that, become a well rounded fighter. There are a couple gyms that could have been even better for him to go to, but Jackson’s MMA is still one of the most elite camps out there with great coaches and fighters. It’s worked wonders for him thus far, as he’s gone 2-0 since joining their camp.

Pico is perhaps the most highly touted prospect ever in MMA history before even having his first fight. The credentials he has in wrestling, boxing, and pankration are just insane, especially for his age. He was the first teenager to make the Olympic freestyle wrestling team in 40 years, a huge accomplishment, and he won the US National Championships in all three types of wrestling: freestlye, folkstyle, and greco-roman.

The guys he beat in achieving these lengths is pretty remarkable as well, given many of them were NCAA Division I National Champions and many of them also placed at world tournaments. He also placed second in the senior US Olympic Trials. He beat the man to take the gold medal from him the first time they wrestled as well. He wrestled him three times, defeating him 4-2 the first time, and losing 3-4 and 4-4 in the next two. He has numerous national and international medals in the sport.

He also won numerous amateur titles in boxing, including the National PAL Championship in 2008, and National Junior Golden Gloves Championship in 2009, both of which he won the Most Outstanding Boxer award in. In pankration, he won the California State Championship twice, as well as winning a national title, and was also the Golden Cup European Pankration Champion. He’s about as credentialed of a talent as any of us will ever find before even making their first walk.

Aaron Pico made his professional mixed martial arts debut at Bellator 180, their first event held at Madison Square Garden, New York City. It was a short lived bout, as he was rocked with an uppercut just seconds into the fight, and submitted with a guillotine choke just 24 seconds into round one. His next four fights however showed a much different story, where he knocked all four opponents out in round one. It looked like he’d just succumbed to the pressure in his first fight, and we were beginning to see what he was capable of. 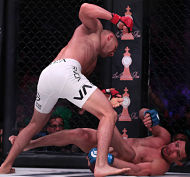 Next came a bout with the 16-3 Henry Corrales. He almost knocked Corrales out early on in this fight, he had him hurt badly, but he got overzealous and got caught. He was knocked unconscious at 1:07 of round one, evidently, he wasn’t quite ready mentally for that one. He had the win in the bag, but much like someone like Cody Garbrandt, Pico just saw red and swarmed recklessly for the finish.

Next, Pico fought the 12-0 Adam Borics, and he was also doing very well in this fight. We saw him use his wrestling for the first time in MMA, and he was dominating the fight with it, taking Borics down and controlling him at will. However, toward the end of round two, Borics timed one of Pico’s takedown attempts perfectly and landed a flying knee just as Pico shot and got the TKO finish. 2019 wasn’t a good year for him. Pico had gone from 4-1 to 4-3, getting knocked out in both of those defeats, and at just 22-years-old.

After he’d lost to Corrales, many of us were thinking they should give him an easier next fight, not someone who’s 12-0 and on the rise. Pico didn’t want that though, he wanted someone that was just as touted and dangerous as himself. It didn’t work out for him, but this was the first time we saw him trying to evolve as a fighter and mix it up during the fight. He didn’t mix it up, all he did was wrestle one-hundred percent of that fight, but he was trying, he was showing us something different. 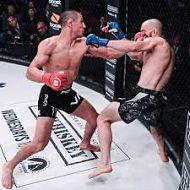 This is where his new camp comes in, Jackson’s MMA. Pico took seven months away from the cage after his defeat to Borics, and many thought he should’ve taken a bit more time, but it’s been working out beautifully for him. After a full training camp at Jackson’s MMA, Pico came out and showed us what he’s capable of as a fighter. He fought 7-3 opponent Daniel Carey, and immediately once the fight started, he threw an array of kicks, something we hadn’t seen from him.

Just over a minute into round one, Pico timed a perfect double leg and put Carey on his back for the remainder of the round. Once round two started, Pico again marched forward, stalking his opponent, faked a snap kick, and threw a vicious left hook right behind it, knocking Carey out just 15 seconds into round two. We’d begun to see the evolution of him in this fight, and that carried on into his next with Solo Hatley Jr.

Hatley is a very fast, talented, and dangerous young talent himself. He had an 8-2 record, he has fought for LFA, and he was 1-0 in Bellator. After landing a nice leg kick to open round one, Pico shot on a double leg up against the fence, switching it to a single leg before finishing it. The entire fight showcased Pico’s ruthless ground-and-pound, he showed us he doesn’t only have power on the feet, but on the ground too. He eventually took Hatley’s back and sunk in the rear naked choke, getting the tap at 2:10 of round one. This marked his first submission win, as well as being the second fight he’s showed us he’s capable of mixing things up in.

We couldn’t really have much of an opinion on his first fight, it ended too quickly, he wasn’t able to showcase any of his skills. His next five fights showed how powerful he is and how great of a pure boxer he is. Then his next showed how great of a pure wrestler he is, but in his last two, he’s showed us how good of a fighter he is. He’ll seemingly become great in no time. He mixed it up beautifully both times, and each of his last two performances showed a first for him. His fight with Carey was his first win that went outside of the first round, and his fight with Hatley was his first submission victory. It’ll be very interesting to see what comes next for him.

Aaron Pico may not have the prettiest record, but he’s surely one of the most youthful and skilled fighters we have in the world today. There is no limit to this kids potential. If there is one critique on him, it’s that he sometimes gets hit. He’d been hurt and finished in three of his first seven fights, and as a very young fighter, that’s not good at all. However, if he keeps going the way he has, he’ll be next to unbeatable. He could also start fighting behind a jab, that’d help him immensely. His game will continue to evolve where he’s at now, and we can’t wait to see what he does next!

What’s next for Aaron Pico?