Though in many peoples minds the Knockout of the Year is already determined, and has been since early October, there have still been a ton of other stellar knockout victories in 2020 to choose from.

There were a lot of knockouts this year in the sport of mixed martial arts, a lot of great fighters picking up great wins, such as Calvin Kattar finishing Jeremy Stephens via TKO back in May. We’ll only be going over KO’s however, it doesn’t make sense to have the Knockout of the Year be from someone who didn’t put their opponent completely out.

In this list, we’ll be going over the top five knockouts of the year, listing that said number of candidates, and asking your opinion, where you can leave your answer in the comment section below. 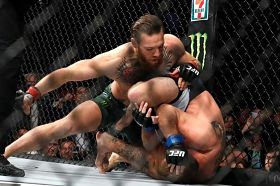 This was followed up by an elite Brazilian Jiu-Jitsu black belt, Herbert Burns, KO’ing three-time M-1 Challenge Featherweight Champion Nate Landwehr with a beautifully timed and placed knee at 2:43 of round one.

Like Landwehr, this was Burns’ UFC debut, and he really shocked us all by knocking Landwehr out, who’d never been finished with strikes before. We’ve since seen how durable Landwehr is, making Gilbert Burns’ little brothers win even more impressive.

Khaos Williams burst onto the UFC scene in February at UFC 247, where he KO’d Alex Morono just 30 seconds into round one. He followed this up with a KO victory over fellow knockout artist Abdul Razak Alhassan, who was 10-2 as a professional, all ten victories via first-round knockout, and both defeats via decision. 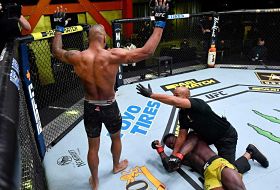 It was pretty crazy; two UFC fights against two very skilled fighters, and they only lasted a total of 57 seconds.

Francis Ngannou fought just once this year, unfortunately, but picked up a 20 second KO victory over 76-8-1 professional kickboxer Jairzinho Rozenstruik. This was quite surprising, because Rozenstruik is one of the best, most knowledgeable strikers in the entire sport, and he’s also one of the most powerful.

Rozenstruik hadn’t lost in mixed martial arts competition prior, and he’d only been finished two times in 85 kickboxing bouts. Ngannou’s power, man, it really is something. The UFC needs to give this man his title shot!

Two of these Knockout of the Year candidates secured KO victories on the same night at UFC 250. First up was Sean O’Malley, who KO’d former WEC Bantamweight Champion Eddie Wineland at 1:54 of round one to open up the main card. 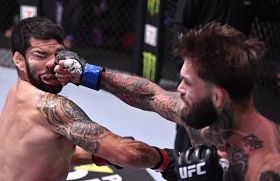 Then in the co-main event, former UFC Bantamweight Champion Cody Garbrandt KO’d longtime top contender Raphael Assuncao at 4:59 of round two. Both of these knockouts were absolutely vicious, and both deserve their recognition.

O’Malley knows just when to pivot his feet and turn his knuckles in order to make his punches sting, rather than thud. And it sure did rattle Wineland’s brain, it was technically perfect.

Garbrandt on the other hand bent over against the side of the octagon, baiting Assuncao to come forward, while he uncorked a vicious right hook and starched Assuncao right then and there. If you watch closely, it wasn’t just a hail mary punch, Garbrandt’s eye never went off Assuncao’s chin. He landed just where he meant to. 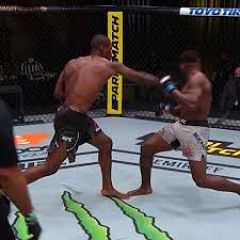 Kevin Holland picked up two incredible knockouts this year. Actually, he picked up a total of four throughout his 5-0 2020 year, but the two most impressive were over Joaquin Buckley in Buckley’s UFC debut, and his most recent over former Strikeforce Middleweight Champion ‘Jacare’ Souza.

We hadn’t seen anything quite like this. Holland was taken down for about 90 seconds. While he was on his back, he decided to just lean up and start throwing hooks, and with his 81” reach, he was able to get the KO from it.

The only time we ever saw something even remotely similar was when Niko Price KO’d Randy Brown off his back with hammerfists, which was a pretty insane moment as well.

Holland’s victim, Joaquin Buckley rebounded from this with the KO of the Century, thus the reason we asked if there was any doubt as to the 2020 Knockout of the Year. He first landed that jumping spinning-back-kick to Impa Kasanganay’s face, ending the fight right then and there, before KO’ing fellow striker Jordan Wright in November.

Billy Quarantillo secured a pretty nice knockout victory this year as well, his coming over Kyle Nelson back in September. After absolutely mauling Nelson for the first two rounds, he came out and landed a beautiful straight-right and got the KO victory just seven seconds into round three. 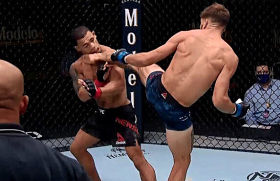 Bantamweight prospect Randy Costa came back and picked up a nice KO victory over fellow prospect Journey Newson, who was coming off a knockout victory of his own.

Khamzat Chimaev also picked up a serious knockout victory in his last fight against Gerald Meerschaert, who he KO’d with a straight-right just 17 seconds into round one, a real jaw dropper that one was.

Ludovit Klein made his UFC debut back in September at UFC 253, KO’ing the ultra durable Shane Young. Dricus du Plessis also made his UFC debut this year, KO’ing Markus Perez in round one. 38-6 professional kickboxer just picked up his first finish, and first knockout inside of the octagon as well with a beautiful head kick.

Su Mudaerji came back this year for the first time in 14 months and secured a 44 second KO victory. That’s pretty rare to see for a flyweight, but this kid is for real! It was very exciting to see him return, especially at 125 lbs. That’s definitely the right weight class for him. 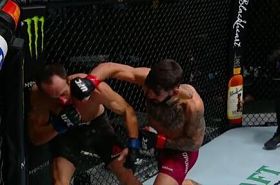 Ilia Topuria also showed off his hands in his last bout, where he KO’d Damon Jackson midway through round one. Topuria is an elite grappler, but we had no idea how good his boxing is.

That’s not to mention Rafael Fiziev KO’ing Renato Moicano at UFC 256, or Cub Swanson KO’ing Daniel Pineda in the fight immediately following. This was followed up by Ciryl Gane knocking out Junior dos Santos, and then Kevin Holland KO’ing ‘Jacare’ Souza. UFC 256 was an incredible night of fights!

The final knockout of 2020 showed surging bantamweight contender Rob Font TKO former six-time WSOF Bantamweight Champion Marlon Moraes. This was incredibly impressive because Moraes is as dangerous as anyone on the feet, and he just got boxed up. 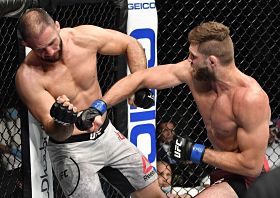 As you see, we’ve had some pretty beautiful knockouts in this year of 2020, the thing is to dumb it down to just five of them.

So, who takes the cake?

We’ve got to give Francis Ngannou his due, it’s hard not putting him on this list. After KO’ing one of the scariest strikers in all of MMA, you’d think it’s a sure thing he gets the award, or is at least in the running. That just speaks to all the incredible knockouts we’ve had this year.

Khaos Williams also deserves a mention, especially for his Abdul Razak Alhassan fight. No one expected it to go that way; of course, we had two devastating knockout artists facing off, but man was it shocking!

Rafael Fiziev had the best performance of his entire career when he KO’d Renato Moicano, who was still a top ten featherweight before moving up to lightweight. Again, no one really expected their fight to go that way, and the finish was absolutely vicious. Fiziev has his professional kickboxing career to thank for that.

By Brady Briggs 55 mins ago