24-year-old Chinese talent Su Mudaerji isn’t new to the UFC per se, but he is new to the UFC’s flyweight division. He initially went 1-1 in his first two UFC bouts at 135 lbs, being submitted (armbar) by Louis Smolka, and defeating Andre Soukhamthath via unanimous decision. 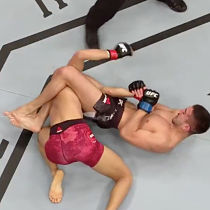 This past Saturday was really Mudaerji’s coming out party. It was his first promotional finish, and he certainly found the weight class that’s right for him. He was a little undersized at bantamweight, though we still saw he had a ton of potential.

Here at flyweight, he’s very slim, but he’s fast, strong, powerful, and accurate. He looked incredible, and against a good opponent. He defeated Malcolm Gordon via KO (punches) just 44 seconds into round one.

The crisp, sharp striking of Mudaerji has always been something to behold, he’s always been a prodigy of sorts. He improved his record to 13-4 with this victory, securing the eleventh knockout victory of his career.

Not to mention, it means he hasn’t taken much damage. Look at Matt Brown, look at Anthony Smith, they both spent a great deal of their earlier careers being submitted, now look at them. Smith hasn’t been submitted since 2013, a year he went 0-3 with all three defeats coming via submission. 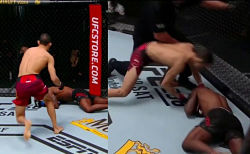 Neer is a well respected brown belt, he’s always had a good ground game, and has submitted a good deal of his opponents throughout his career.

Smith hasn’t been submitted since then, and he’s picked up some submissions victories of his own in the time since.

Matt Brown hasn’t been submitted since he fought Demian Maia in 2016, his only submission defeat since 2011. That’s pretty insane when you consider his record used to be 14-11 with nine of those defeats being submissions.

As mentioned above, Mudaerji is still only 24-years-old, turning 25 in January, he has all the time in the world to improve his grappling, and his striking is already well above average. He’s an incredibly exciting talent to watch.

Hopefully Mudaerji can start competing more often and be more active, because forget the sky, there really is no limit to this kids potential.

After improving his UFC record to 2-1, having won his last two fights, what’s next for this Chinese prospect? He shouldn’t be moved too fast, given his experience and age, but he certainly appears ready for some high level opposition. 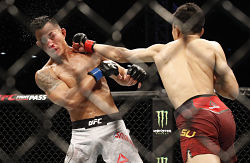 Raulian Paiva would make for a very exciting match up. Paiva, like Mudaerji, is a great striker, and is also in his mid-twenties. He came to the UFC with a record of 18-1, and though he lost his first two promotional bouts, he’s now on a two-fight win streak, just like Mudaerji. This fight makes all the sense in the world, and it’d be a good test for each man.

A fight with David Dvorak is also really compelling. Dvorak is one of the most technical strikers in the flyweight division, and he improved his record to 19-3 in his last bout, making it 2-0 in the UFC. This is another great match up of elite strikers.

Lastly is the winner of Zarrukh Adashev versus Jeff Molina, going down January 30. 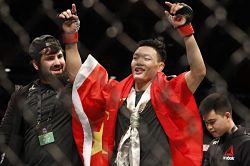 Adashev made his UFC debut in his last fight with just a 3-1 record, and was KO’d by Tyson Nam. He did however go 16-3 as a professional kickboxer, Adashev is a fun talent to watch. We can also be sure that’d be a great striking affair.

Molina is a Contender Series winner and comes into his fight against Adashev with a record of 8-2. If he defeats Adashev, perhaps he should get Mudaerji next.

Any of these fights would be truly epic. We’re telling you, Mudaerji is the real deal. This kid’s been so fun to watch, and fun to predict how his future will go. He’s going to be one of the true elites of the sport, just watch. He still has at least six years until he’s in his physical prime.