The UFC’s featherweight division has been one of the most fun divisions in mixed martial arts since it came about in late 2010. It was a very fun division in the WEC as well, and it’s only gotten bigger and better since.

Every year we have all sorts of new talents coming into all divisions, but featherweight has really produced a lot of potential stars lately. There are so many new guys coming in that are huge for the weight class, incredible strikers, it’s perhaps the UFC’s most fun division to watch. 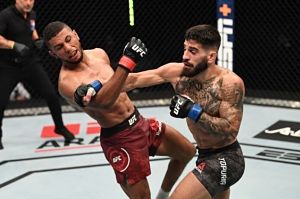 One of these new and exciting young prospects currently hails from Spain, with Georgian roots, by the name of Ilia Topuria. He’s looked absolutely incredible thus far into his UFC career, and we can’t wait to see more of him!

Topuria made his promotional debut just two months ago in October with an 8-0 record, and he’s quickly gone 2-0 in these two months inside the octagon.

First, he defeated Youssef Zalal via unanimous decision at UFC Fight Island 5, the night Cory Sandhagen defeated Marlon Moraes. This was incredibly impressive because Zalal had gone 3-0 in the UFC prior to their fight, he was 10-2 coming in, and he’d looked nothing short of spectacular up until he fought Topuria.

Zalal tried to rally in round three, but it wasn’t enough, he was out-classed throughout the fight. This was Topuria’s first time going the distance in his young career, and his cardio held up quite well, in an absolutely grueling fight too. 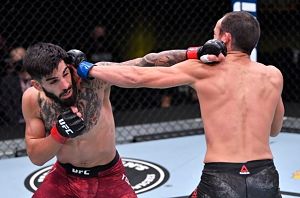 Topuria followed this up by KO’ing Damon Jackson at 2:38 of round one. He came in looking for the knockout finish and he got it, it was crazy because we’d only known him as a grappler.

Jackson came into this fight with a record of 18-3-1 (1 NC), he’d just returned to the UFC in his fight prior, where he submitted (guillotine choke) Mirsad Bektic, which is a pretty big feather in anyone’s cap.

Topuria grappled and wrestled for most of his fight with Zalal, but as we were shown, his striking is vicious as well. At just 23 years of age, Topuria is already a Brazilian Jiu-Jitsu black belt, and he’d finished seven of his eight victories via submission before joining the UFC.

Now, we wait to see that submission from him, because we haven’t seen it yet, it’s surprising. For a grappler to come into the UFC and defeat two very good fighters and walk away with a knockout victory in one of them, it’s incredible to see. 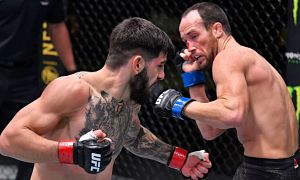 We saw a lot of his grappling in his UFC debut, best believe we’ll be seeing a lot of it in the future. As far as his striking, particularly his boxing, it’s remarkable how good he is at that, especially when knowing how good he is on the mat.

Damon Jackson isn’t an expert on the feet, he’s more of a grappler himself, but he’s a very good fighter in his own right.

The sky is the limit for this kid, he’s already so talented and we have a considerable amount of time before he’ll be at his best.

At featherweight, that’s saying a lot, but it speaks to Topuria’s potential. 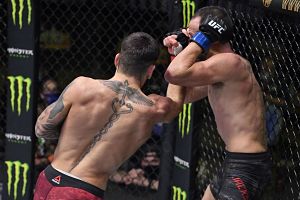 English talent Lerone Murphy would make for a pretty exciting fight, and it’d be a good fight to propel the winner forward. Though neither of them are ranked, they’re two of the brightest featherweight prospects in the sport.

Murphy has a record of 9-0-1, and he, like Ilia Topuria, has fought twice thus far into his UFC career. He went to a draw with Zuba Tukhugov, and he TKO’d Ricardo Ramos in round one of their July bout.

Alex Caceres would be a good test for him as well. Caceres has been around since The Ultimate Fighter 12, and though he doesn’t have the prettiest record, at 17-12 (1 NC), he’s a very good fighter that’s many young fighters’ kryptonite. He’s a lanky striker that has some good submissions of his own. 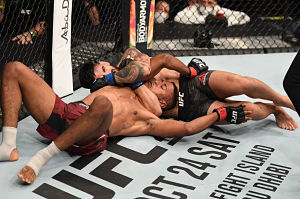 Movsar Evloev would also be a fun fight to see Topuria in. Evloev was expected to face Nate Landwehr last week at UFC Vegas 16, but a positive Covid-19 test kept him from making the walk. He’s an undefeated, 13-0, former four-time M-1 Challenge Bantamweight Champion.

Lastly, and this is perhaps the best match up of them all, is a fight against Makwan Amirkhani.

This would be a great fight because, well, they’re both absolute studs on the mat and they both have good boxing. Amirkhani is one of the best overall grapplers in the sport, he doesn’t get anywhere near enough credit.

Whoever ends up being next for Topuria, one thing’s for certain, we’ll all be tuning in. This kids future is so bright, he can already do it all. He’s already dangerous everywhere, it’ll be very fun watching him in his fights to come.