Randy ‘The Zohan’ Costa has made for a very fun edition to the UFC’s bantamweight roster. He improved his UFC record to 2-1 this past Saturday with his victory, he just keeps getting better and better every time we see him.

There isn’t much to go off of, considering his fights don’t last long, and he hasn’t had many of them, but he is incredibly impressive, and equally as fun to watch.

Costa came to the UFC in April of 2019 to face natural featherweight Brandon Davis in his UFC debut. 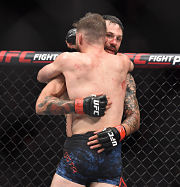 The fight was at 135 lbs, and Davis was absolutely huge for the weight class. Davis ended up submitting Costa in round two with a rear naked choke, but Costa impressed us all in defeat.

That was the longest fight of Costa’s career, a fight that went 72 seconds into round two. All of his wins came in round one via knockout, and he also went 3-0 as an amateur with all three victories coming via knockout.

However, that fight, along with three others in 2015 were cancelled, and he didn’t fight again until 2018. He was forced to spend nearly four years away from the cage, three years and nine months to be exact. 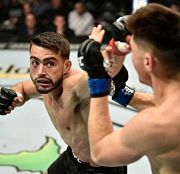 Costa picked up right where he left off in his professional debut however, and that carried him up to his UFC debut.

Since losing to Davis, he’s defeated fellow knockout artists Boston Salmon and Journey Newson, both of which had a lot of hype in their own right.

He knocked Salmon out with a beautiful punch combination, and he knocked Journey out with ahead kick, the second head kick KO of his professional career. 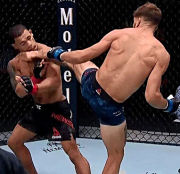 Though Costa’s very unfortunately had a lot of time lost, he clearly didn’t lose focus on his career, he came back and picked up right where he left off.

He had exactly eleven months off between his last two fights as well, considering his March booking was cancelled due to Covid-19.

He’s still only 26-years-old as well, he has plenty of time to continue growing. His striking is already so hard to read, yet so effective, flashy, and accurate, it’s going to be a load of fun to see what his future brings.

Given how his last two fights have gone, what’s next for Randy Costa? He only has ten fights total in his entire career, seven as a professional, he shouldn’t be moved too fast, but does clearly need a step up in competition.

It’s too bad the 12-4 Aaron Phillips is booked for Halloween’s card, he’d be a great fight for Costa. Though Phillips is 0-3 in the UFC, that means he’s 12-1 outside of the UFC, and he’s a very entertaining striker to watch, just like Costa.

Mario Bautista would be a fun fight for him, he’s 8-1, which includes a 2-1 run in the UFC with his only defeat coming to Cory Sandhagen. Bautista’s also a fun to watch bantamweight, and is coming off a flying knee knockout in his last fight.

The 12-3 Jonathan Martinez would also be a fun match up. Martinez is 3-2 in the UFC with two third round knockouts, and he gets better every time we see him. Being the same age as Costa, at 26-years-old, this would make a great next fight for Costa as well.

The potential Randy Costa has is seemingly endless, he puts on an incredibly impressive, but very short performance almost every time we see him compete.

He’s fighting out of Lauzon Mixed Martial Arts as well, so we know he’s got good grappling coaches as well. Standing 5’9” with a 73” reach, he has the perfect frame for this bantamweight division, especially for his style.