More than two years have now passed since the last time Zoila Frausto stepped into a cage for a professional mixed martial arts fight. “The Warrior Princess” amassed a 13-5 pro MMA record in a career that spanned from 2009-2016.  MyMMANews.com reporter Tony Reid caught up with Frausto to discuss her efforts to pave the way from women competing in the sport.

Tony Reid – If you could choose one fight from your career that every MMA fan should see, which fight would you choose and why?

Zoila Frausto – “That had to be my fight with Rosi Sexton. It was my first fight in Bellator. She was going into the 115 pound tournament that Bellator was putting together. I was brought in to be her warm up fight. It was a catch weight at 120 pounds. They brought me in to be run over by her. It didn’t work out that way. She was the number one contender at 125 pounds. I think she was number three pound for pound at the time. By the two minute mark I had knocked her out. That was one of the biggest knockouts in women’s MMA and by far my biggest fight and win to date. It was a pretty big accomplishment for me at the time.”

TR – You are the first and only female champion in Bellator history. Being a pioneer in many ways what are your thoughts on the seemingly daily growth of WMMA?

ZF – “I knew it would happen but I didn’t think it would happen while I was still fighting. I thought it would pick up well after I was out and done. It has been amazing how fast it has grown and how big it is getting. It’s amazing.”

TR- We have recently seen far more women on TUF and even an all-women’s season. What are your thoughts on an all women cast of characters in the house?

ZF – “I think it’s pretty cool. It’s giving the fans something different. Especially when we are talking about women fighting, the public still seems a bit unsure about the whole thing. It shows how talented women in MMA really are. There will definitely be a lot more drama in that house but it shows that we do belong in MMA. It’s great to have a 115 pound title and a bunch of great women in the UFC.”

TR – Hypothetically, if you could fight anyone in any weight class who would you choose to fight and why? 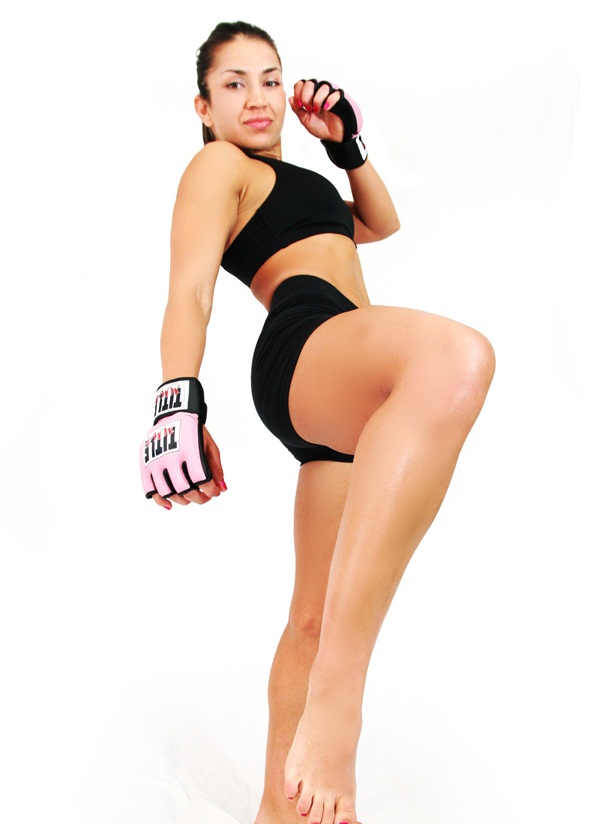 ZF – “Who wouldn’t want to fight Ronda (Rousey)? I would have fought her at 135 but she has an obvious strength advantage. To fight her around 115, if she were be a bit closer to that weight class that would be fun. She is a crazy athlete and amazing in so many ways. It would be a dream for me to fight her at a weight class closer to mine. But at 135 she’s a damn beast. To go up to her weight class I would have to knock her out pretty quickly for things to go my way!”

TR – As you came up there were fewer opportunities for women in the sport. Do you ever wonder if you weren’t a professional mixed martial artist what would you be doing for a living?

ZF – “Since I was a kid I knew I was going to be doing something in the athletic field. I always wanted to be a professional athlete. I just never knew what it was. My dad pushed me in every single sport until we found which one I liked. I thought it might be professional soccer player at one point but I knew whatever it was it was going to be something to do with athletics. I worked in gyms for years. I actually worked in a casino up until my fifth pro fight. As soon as I tried my hand at boxing and then Muay Thai, it was probably right around a year after I started training that I took my first pro fight. That’s when I realized that this is what I wanted to do and this is what I want to dedicate my life to.”

ZF – “Everything from volleyball to basketball. I ran track and field. I was a four year varsity lettermen in cross country, soccer and track and field. I was a star athlete in every sport I could possibly touch or do. I attribute that to my dad. If we were busy doing something he would have us run a race on a Saturday. He would always keep us busy in some athletic endeavor. I even played some college ball, soccer, in Fresno. I got a little injury there and took some time off. I was getting bored with soccer. I found myself being more aggressive on the soccer field. I was being mean. I needed another outlet. I trained at a gym and jumped into the boxing class. From that point on I was training boxing and Muay Thai every day and took my first fight about a year later. The rest is history!”

TR – As a fan, who are your favorite fighters to watch and why?

ZF – “Anderson Silva was always a guy I wanted to watch. He is a huge figure in the sport and I always enjoyed watching his fights.”

ZF – “The only thing I can think of is that I’m a lover and a fighter! I might be pretty mean in there but I’m a big teddy bear, too.”

ZF – “Think before you speak. I got in a lot of trouble saying a lot things before I even thought about it.”

TR – What was the best moment in your career so far?

ZF – “My first Muay Thai fight back in the game. I had three losses back to back in MMA. I had a few personal issues to work thorough. I was right on the verge of retirement. Going into that fight and doing as well as I did, just feeling the love I still had for combat sports, that was the biggest push, the biggest motivation, knowing I still had it. That was the best memory I had so far.”

TR – Who has been your best opponent?

ZF – “Megumi Fuji. I went 25 minutes with her. I still to this day don’t know how I did it. When it comes to intelligence, she has to be the smartest fighter I have ever fought. She was 22-0 up to that point. That was the toughest fight I ever had.”

TR – What is the best way to get ready before a fight?

ZF – “It goes back to the whole Mike Tyson thing. I take my I-pad into the locker room, where we are warming up, and I will listen to his interviews, watch his fights and get ready. That and music. I listen to music and right before I walk out I turn into something else. I don’t even know what it is. I feel like I’m completely unstoppable. When I put those two together (Tyson and music) and start hitting pads, I turn into this crazy animal before I walk out. When it comes to music I listen to modern day hip hop like Jay-Z and Kanye.”

TR – What was your best job before becoming a fighter?

ZF – “I was a dealer at a casino. I dealt cards. It was easy money. I was around adults all day so the adult jokes and conversation and hearing about people’s lives that was fun. I really enjoyed hearing people’s stories.”

ZF – “I have had so many of them. Just pick the people I let into my wife a little wiser. Be more cautious with who I let into my life.”