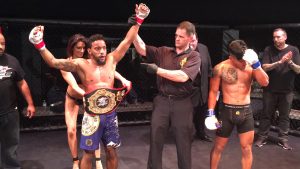 On Saturday night, June 25, 2016, Gonzalez and Leon went two and a half rounds of nonstop action in front of ACC’s sixth sold out show. After a war of words, these two fighters left everything inside the cage to deliver one of My MMA News’ selected Fight of the Night honors.

Fights are sanctioned by the USMTA. The gold standard for MMA sanctioning bodies in New York.

Below is the video of the bout. Please enjoy!