Alistair Overeem to Serve as Guest Analyst at GLORY: COLLISION on Dec. 10 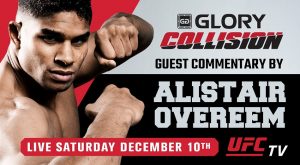 Overeem will take on the role of guest analyst for this special event, manning the commentary desk alongside Todd Grisham, handling play-by-play, and standing GLORY analyst “Bazooka” Joe Valtellini. Rounding out the team and representing Overeem’s broadcast colleagues for the evening are GLORY backstage reporters Ron Kruck and Whitney Miller.

As guest analyst, the mixed martial arts and kickboxing superstar has been tapped to call the action for all four bouts comprising GLORY: COLLISION. An expert in the striking arts, Overeem is the only fighter to have held major MMA and kickboxing world titles simultaneously.

“I’m very much looking forward to this Saturday and GLORY: COLLISION,” said Overeem. “It will be a very exciting night and I’m pleased to be one of the analysts at the commentary desk.”

Overeem is no stranger to Hari, having faced the former rival twice during his kickboxing career.

Priced at $29.95 US, GLORY: COLLISION is available via Pay-Per-View on North American cable and satellite providers and globally via the UFC.TV digital service. Pre-order now at ufc.tv/glorycollision.

The complete four-fight Pay-Per-View card for GLORY: COLLISION, airing live at 4 p.m. ET / 1 p.m. PT on Saturday, Dec. 10 can be found below:

Before GLORY: COLLISION, fans can tune in for the GLORY: COLLISION Prelims, available FOR FREE to everyone worldwide simply by clicking ufc.tv/video/glory-collision-prelims. The five-fight prelim card streams live at 1:30 p.m. ET / 10:30 a.m. PT on Saturday, Dec. 10.

Tickets for GLORY: COLLISION are officially sold out.

For more information about GLORY or how to watch, visit glorykickboxing.com.

By Matthew Putterman 1 day ago