The Featured Fight on the UFC FIGHT PASS Prelims on May 29 will be the high-stakes bantamweight grudge match between Aljamain Sterling vs Bryan Caraway. 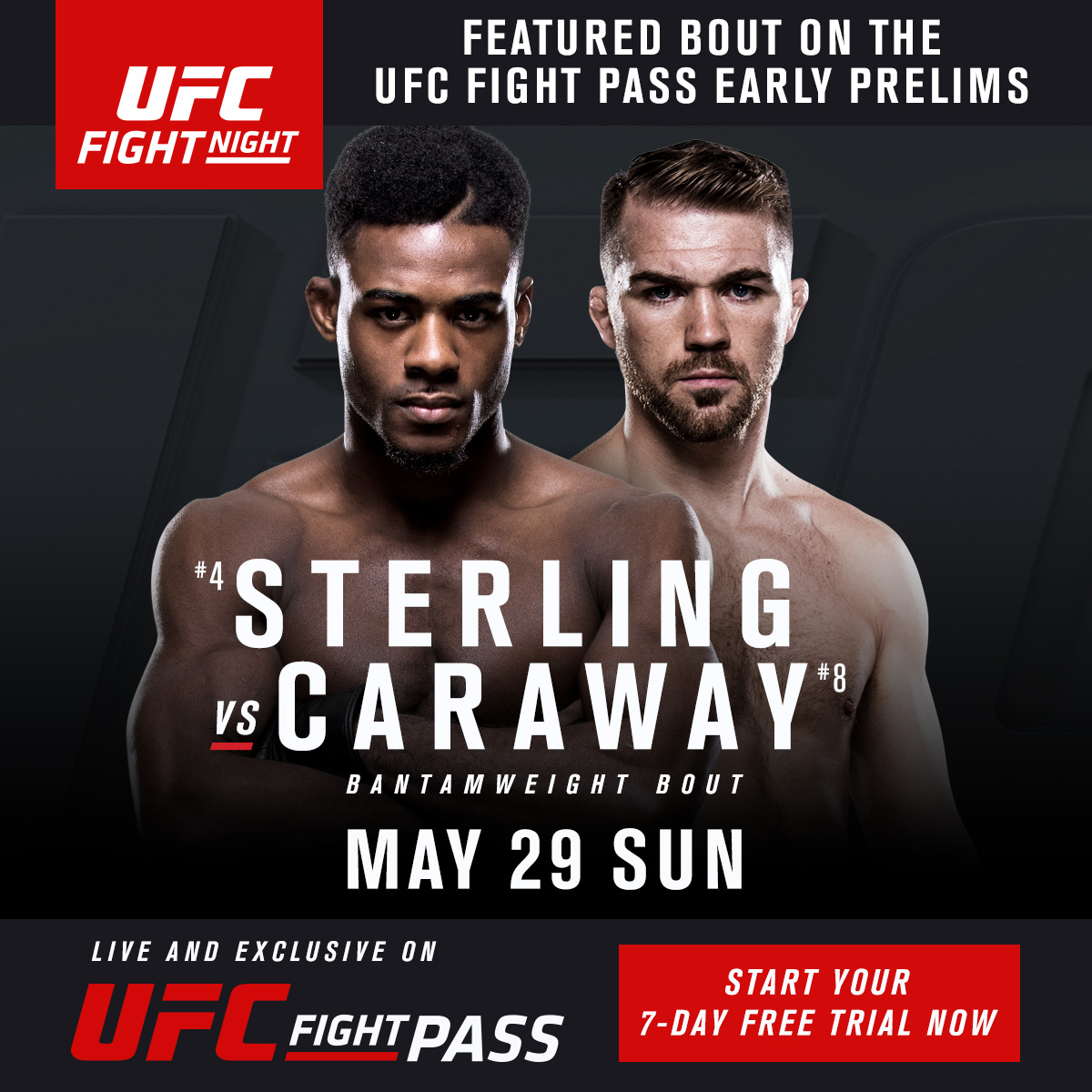 Before the fight was even announced, the No.4 ranked “Funk Master” blasted Caraway on social media, referring to the No.8 ranked contender as “Mr Tate” and a “house husband” in reference to Caraway’s well-publicized long-term relationship with new UFC bantamweight champ Miesha Tate.

The undefeated Sterling said: “I’ve got to crush his dreams to get what I want – that nice shinny belt. He’s a good fighter, but he’s got the human anaconda wrapped around his neck on May 29.

“This is my coming out party. A lot of people know who he is, and a lot of people don’t like him. I’m going to do the fans a favor and retire this guy. I’m going to force him to take that last step to becoming a full-time house-husband. After I choke him out, he can just stay home, relax, binge-watch Netflix all day, and just worry about having Miesha’s food ready for her when she gets home. She’s the real fighter in the family and Bryan should leave the fighting to her.”

But Caraway has dismissed Sterling’s taunts as “irrelevant” and, having beaten a UFC title challenger in Eddie Wineland his last fight, is confident of using Sterling to springboard into the top 5.

Caraway shrugged off the taunts: “All that is weak. I feel sorry for him. I want to fight him because he’s ranked No.4, the rest of it is childish.”

The bantamweight contender fight will be LIVE only on UFC FIGHT PASS.

BETHE IS BACK – TAKES ON PENNINGTON APRIL 16 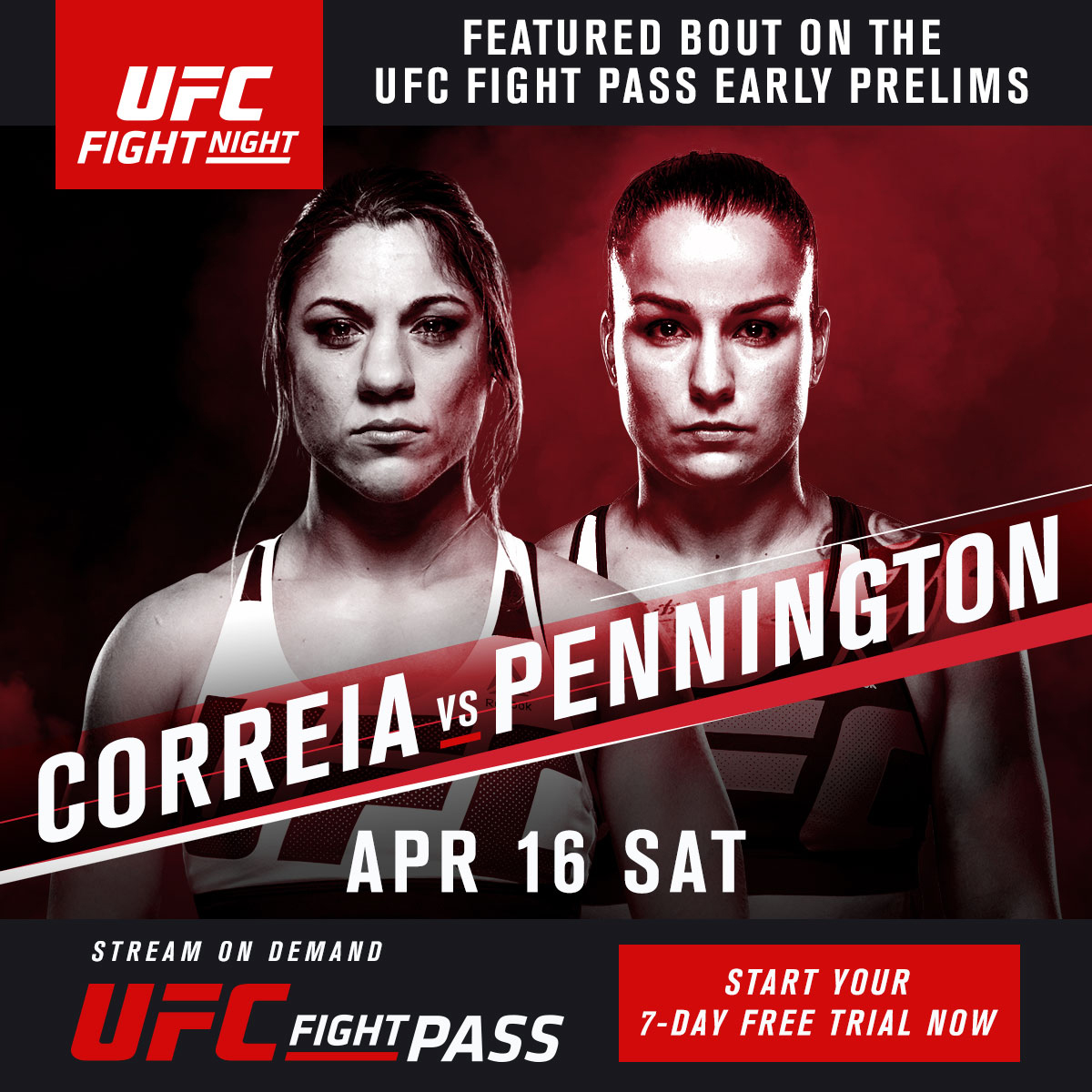 The Brazilian brawler is determined to put her lone loss – to Ronda Rousey last August – behind her while Pennington looks to build on her career-best win last time out vs Jéssica Andrade.

It was only a year ago that Pennington pushed Holly Holm to a split decision, and so this fight has serious implications for the future of the ever-changing women’s 135lbs division.

DANA (AND THE BOYS) ARE LOOKIN FOR A FIGHT AGAIN

FIGHT PASS customers can enjoy the new episode of Dana White: Lookin For a Fight before anyone else.

In arguably the best – and certainly the most hilarious – episode yet, Dana, Matt Serra and Nick the Tooth head to Minneapolis to scout a heavyweight prospect at an action packed Legacy FC card.

While in town, the boys also do try a little snowboarding, tour a brewery, visit a local BJJ gym and – in what must have seemed like a good idea on paper – learn a death metal song from the band Roads of Glass, before performing it at rock bar.

UFC 196 – headlined by the wildly exciting brawl between Conor McGregor and Nate Diaz – is now streaming on UFC FIGHT PASS.

With the now rematch set for the historic UFC 200 show in Las Vegas in July, there’s no better time to to re-examine the first fight.

How close was Conor to winning the fight in the first round? Was Diaz badly rocked, or did McGregor’s shots flatter the Irishman’s efforts? McGregor said he wasted too much energy going for the KO – on second viewing, can you see that happening? When did Diaz take over the fight? What, if anything, will be different at UFC 200?