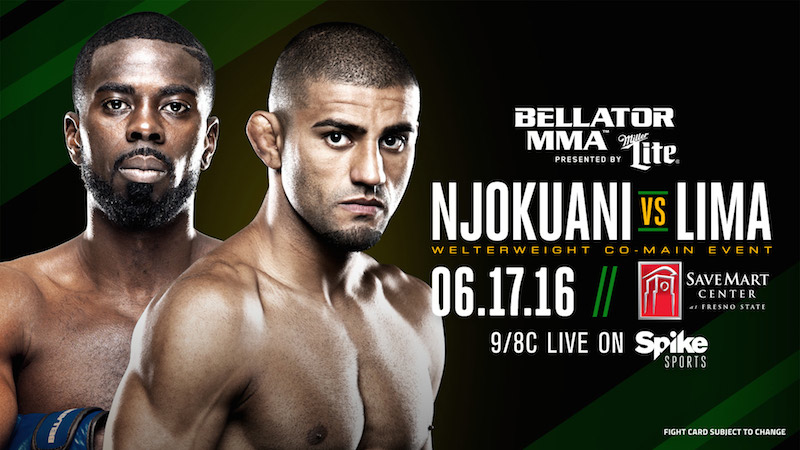 “Bellator 156: Galvao vs. Dantas 2” airs live on Spike at 9 p.m. ET/8 p.m. CT, while preliminary bouts will stream live on Bellator.com and The Bellator Mobile App. Additional fights will be announced shortly.

Tickets for the event start at only $25 and are on sale at the Save Mart Center Box Office, as well as Ticketmaster.com and Bellator.com.

“Chidi Bang Bang” has not lost in his past six fights dating back to March of 2013 and finished last year strong, recording a unanimous decision victory over Ricky “The Sniper” Rainey in his Bellator MMA debut at “Bellator 146: Kato vs. Manhoef.” The 27-year-old Las Vegas native is now looking to solidify himself atop Bellator’s always-competitive welterweight division when he takes on “The Phenom” in the co-main event of “Bellator 156: Galvao vs. Dantas 2.”

Douglas Lima will be entering the cage for the 11th time under the Bellator MMA banner, having already won eight of his 10 bouts with the Viacom-owned organization. The former Bellator MMA welterweight titlist saw his impressive five-fight winning streak come to an end in July of 2015, when current champion Andrey Koreshkov edged out a unanimous decision victory over Lima to win the title. Prior to the defeat, “The Phenom’s” hot streak consisted of five consecutive knockouts, four of which came in the first two rounds. Lima will now begin the climb back up the ladder, with the ultimate goal being to regain the strap by year’s end.