In 2016,  Alliance MMA completed an initial public offering which culminated in a listing on the NASDAQ stock exchange. Alliance MMA (NASDAQ:AMMA) is a mixed martial arts (MMA) company that publicly began trading in October 2016, opening at $4.50 a share.

Alliance MMA is the only mixed martial arts promotion company that is publicly traded. It was the first of its kind to do so since the International Fight League in 2006. 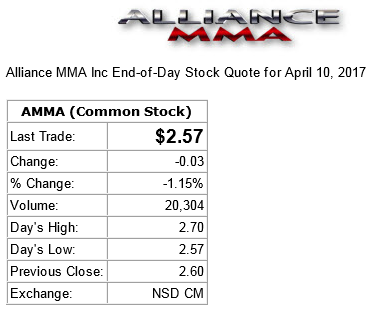 Despite the low offering, Alliance MMA is still moving forward.  Last week Alliance MMA officials announced the execution of Letters of Intent to acquire the assets of two regional mixed martial arts promotions, Undisputed Productions, LLC, which operates in a number of Georgia and South Carolina locations under the National Fighting Championships brand, and The Englebrecht Company, Inc., which operates in the greater Los Angeles market under the tradenames Roy Englebrecht Promotions, Battle in The Ballroom and Fight Club OC.

Next up, Cage Fury and Combat Games are set to host events simultaneously on May 20th as CFFC 65 is held at the 2300 Arena in Philadelphia, PA and COGA 55 returns to the Snoqualmie Casino. CFFC intends to make its return to San Diego in early June of 2017.

By Doug Geller 9 hours ago